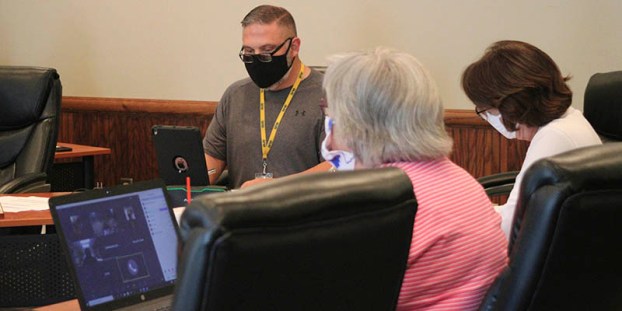 In this file photo, Poplarville Mayor Rossie Creel wears a face mask during a Poplarville Board of Aldermen meeting near the end of July. In recent Board meetings, most members have attended virtually, while Creel live streams the meetings from City Hall. Photo by Cathy Cook.

Poplarville’s mayor was diagnosed with COVID-19 Friday after driving a school bus for the first two days of the semester.

Along with serving as mayor, Rossie Creel is the Transportation Director for the Poplarville School District. Due to a shortage of bus drivers at the start of the school year, he drove a school bus on Thursday and Friday.

None of the students on the bus will have to quarantine, said Superintendent Konya Miller. The school district is following Mississippi State Department of Health guidelines for K-12 reopening during COVID.

“For anybody in close contact, we would have quarantined, but a close contact is an individual within six feet for at least 15 minutes or greater. So, nobody was in contact with him for more than 15 minutes…Had it been a student on the bus it would have been a different situation,” she said.

Everyone on the school bus was wearing a face mask, Miller said.

Creel and his family are on a quarantine order. Initially Creel stayed on the opposite end of his house from the rest of his family, but his wife and daughter have since become sick with COVID as well. His son is not sick and is still isolating from the rest of the family on the other side of their home.

“We’re making it through it,” said Creel. “The symptoms have been pretty rough, but not as bad as you hear a lot of folks have. The worst part for me has been fatigue. The smallest task is pretty exhausting.”

Alderwoman Shirley Wiltshire will be serving as mayor pro tempore while Creel recovers.

Creel said he encourages everyone to follow CDC and the Governor’s guidance for preventing the spread of COVID-19, like wearing a face mask, hand washing and practicing social distancing.

“Do everything that you’re being told, because actually having to battle this in my household has really been an eye opener for me,” Creel said. “I took precautions before. I wore a mask, other than sitting in a restaurant. It’s hard to wear a mask when you’re out to eat. I’m not even sure where or how I contracted it, but I did and it’s a real thing and you get really sick. I hate to see anybody go through this.”

Creel said he can’t express how much he appreciates the support he’s received from the community since sharing his diagnosis online.

“It means everything. Just the support and the prayers, all of that has a healing element to it. We appreciate that. This isn’t the first time that my family’s had some trials.”

Creel said his wife battled cancer in 2015, and just like then Poplarville’s community has again shown the family support by dropping off food and medicine and sending prayers.

Tables filled with books were spread across the lawn of the Margaret Reed Crosby Memorial Library on Saturday for a... read more