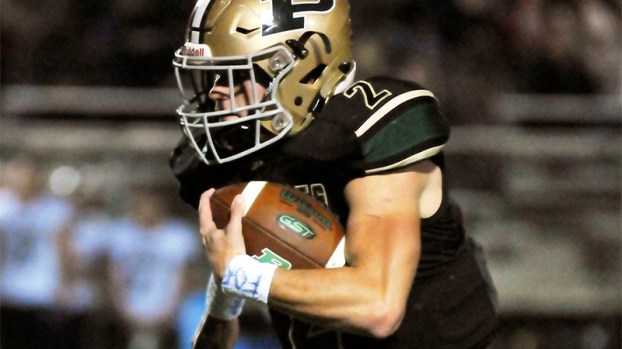 Less Noise: The Poplarville Hornets will have to adjust to playing in a less crowded stadium this year after Gov. Tate Reeves implemented fan limits at high school sporting events. File photo by Jonathan Mitchell.

Athletic Director Jay Beech said the current plan is to have all organizations that would normally participate in a football game, including cheerleaders, dance team, the band in addition to the football team to provide the best possible Friday night lights experience in the midst of a pandemic.

The restrictions implemented by Reeves means that only two people are allowed into the stadium per participant.

Beech said members of participating organizations will have the opportunity to buy two tickets before the game.

Once inside the stadium it’s required for all attendees to wear a mask and fans should socially distance when possible.

However, with the executive order set to end Aug. 31, and the Hornets not hosting any football games until next month, the rules may change when home games begin in September.

Volleyball will be under the same restrictions as football when it comes to fan attendance, which include social distancing and mask use. While at football games the band will be able to spread out in its own set of bleachers, meanwhile the cheerleaders will need to make sure to stay out of the players’ area of the field. Beech said plans are still being formulated on how to police social distancing and preventing groups from crowding around the fence line.

Tailgating may be allowed to begin with as long as the numbers are low and everyone is wearing a mask, but Beech said if it gets out of control more restrictions will have to be put in place.

“We’re not like colleges, we’re not going to have 10,000 people tailgating, but if we have a few people tailgating they can probably do that if they’re wearing a mask or social distancing. If it gets too big then we may do something different,” Beech said.

Currently only cheerleaders will be able to accompany the football team during away games, but that may change in September depending on if the attendance restrictions stay the same.

For fans who won’t be allowed at the games there’s still a way to enjoy the live action by using Mixlr to listen to the radio broadcast of the game.

Those who do attend will be expected to be smart about how they space themselves out around the stadium.

“We’re going to allow people to use good judgment to spread out in stands. If it gets to a higher capacity we may mark off areas, but right now with two participants per child you can spread out all over the stadium,” Beech said.

The concession stand will be open, but will only consist of grab and go food options instead of things like hamburgers and other previously offered menu items.

The Poplarville football team will travel for a scrimmage against East Central Sept. 28 with true competitive play beginning Sept. 4 with an away game against Biloxi.

Volleyball’s season will start Aug. 25 with an away game versus Perry Central. Beech said that as long as people follow the COVID-19 guidelines everything will run smoothly. “All year people can’t be without a mask and (must) socially distance when you get in the stadium. If people abide by those two things we’ll be in good shape,” Beech said.

Like many other organizations dealing with the effects of the COVID-19 pandemic, the Pearl River Soccer Club is hoping to... read more