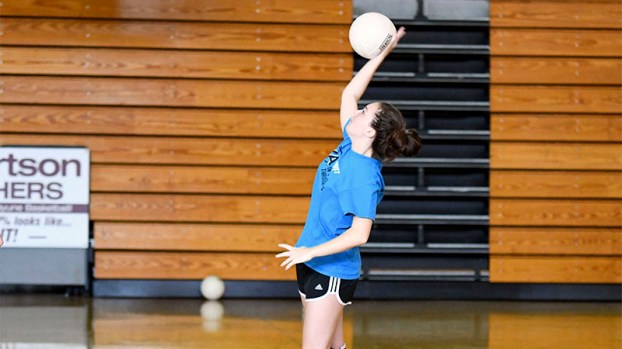 Up To Serve: Serving has been a point of emphasis for the Lady Maroon Tide in practice, and after the team's serving performance against Pass Christian it'll continue to be an area the players look to improve upon. Photo by Jonathan Mitchell.

It was the first game of the season for the Lady Maroon Tide, and Head Coach Courtney Dickens said there were some positives and negatives to take from the team’s first performance.

This is just the program’s third year of competition, but expectations are rising for the Maroon Tide as they look to build off the progress made last year.

There are still areas of improvement, with one of them being the athletes’ serve.

Dickens said her players served the ball out of bounds 24 times against Pass Christian, which essentially gifts the Lady Pirates free points.

“You take away all those missed serves and we’re right in the game. The other team did not give us points. We had to work for our points and if you take the missed serves away it’s a different ball game,” Dickens said.

A positive that came from the performance was the team’s ability to adapt.

Several players were out with injuries, so Dickens had to do some shuffling with her line up, but the athletes filled their roles admirably.

“I’ve had to move a lot of people around, but the people playing in different positions stepped in and did a great job.

It’s not anything anybody else isn’t having to do,” Dickens said.

Ball movement, setting and hitting out of the back were all things Dickens thought the team did well in its return to competition.

The players had to change some of their routines due to the pandemic, like limiting the number of family members traveling to the game, wearing masks and altering their warm ups.

Those changes, along with it being the first game of the season, led to some nerves on the court.

However, over time the athletes became more comfortable and settled into their normal rhythm.

“The girls were really excited and were so happy they were getting to play. (A few) changes took them out of their routine, but the atmosphere was good,” Dickens said.

The Mississippi High School Athletic Association has released a set of new rules to try and make the game of... read more