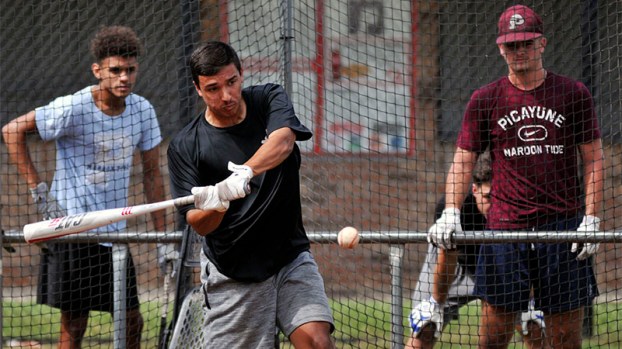 Former Player: Logan Ledet takes part in batting practice last year before the start of the season. He's one of the seniors that'll have to be replaced this year after graduating. Photo by Jonathan Mitchell.

Head Coach Evan Nichelson said this was the third year the team held a golf tournament fundraiser, although it was his first as head coach.

There were 22 teams in the tournament with each person paying $65 to take part.

However, even with the great turnout, Nichelson said health protocols were in place to keep attendees safe.

Nichelson said the fundraiser was important because of the money lost due to the team’s spring season being cancelled.

There was money spent that couldn’t be recouped like food for the concession stand along with lost ticket sales that the program would usually receive during a normal season.

“We’re not getting that money we would usually get this year, but we’ve had two pretty good fundraisers this year. I think we’re in a good spot heading into next year,” Nichelson said.

However, there were some positives financially that were part of the early end to the season.

Nichelson said there were still plenty of game balls left over, which are a constant cost for baseball programs as they cycle through balls during games.

There was also less wear and tear on things like helmets and jerseys, so it wasn’t all negative for the Maroon Tide following the early cancellation of the season.

“We took a hit in regards to money you’d get from concessions, but there are some positives. I’m an optimist and I try to look at the positives in most of things,” Nichelson said.

The success of the fundraiser will help support the program as it looks to make the most of an unusual year.

The contributions of the community didn’t go unnoticed and Nichelson said it meant a lot to see such a good turnout.

“I can’t thank the community enough with the past two fundraisers we’ve had. They’ve showed up and really showed they care about the kids and the program,” Nichelson said.

DSCL finishes its season with playoffs