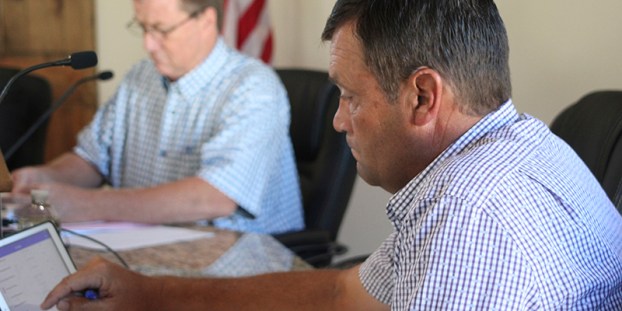 Jason Spence and Malcolm Perry listen to updates on bridge projects in Pearl River County at the regular Board of Supervisors meeting Wednesday. Photo by Cathy Cook.

There has been a lot of new construction in the county, he said, with 36 house permits issued in the last month. At their regular meeting Wednesday, members of the Pearl River County Board of Supervisors acknowledged the monthly planning and development report, which shows the Building Division issued 267 permits in July, which generated $32,620 for the county. Along with the 36 house permits, four were for commercial construction and 14 were for mobile homes. In total, 1,301 permits have been issued since January, of which 157 have been for residential construction.

In a separate matter, the Board does not plan to hold budget workshops before passing the county budget for the next fiscal year. Instead the plan is to adopt the same budget as the previous year.

The county is down $500,000 to $600,000 in revenue, due to the pandemic, Lumpkin said. The pandemic has not affected property tax, but has affected other revenue generated by county government, such as revenue from the court system. Revenue from the courts will be less than in the previous year, because fewer hearings have been able to be held, so fewer tickets and other fines are being paid, he said.

Additionally the county has added an extra $300,000 to $400,000 in expenditures due to the pandemic, he said. The county has received some financial relief from the state on some of those extra costs.

Lumpkin recommended keeping every department’s budget the same as the previous year.

“If we don’t see a turn around in the next year, we’ll have to address something with that, I think. I know financially we’re okay right now,” said Lumpkin.

—Approved travel to Hattiesburg for a free “Gang Combat Dynamics” class for an employee in the Pearl River County Sheriff’s Office.

—Gave permission to accept the lowest quote for two $50,000 loans for two fire trucks for two different volunteer fire departments in the county.

The Poplarville Board of Aldermen discussed paving and personnel at their regular Board meeting Tuesday and set a meeting for... read more