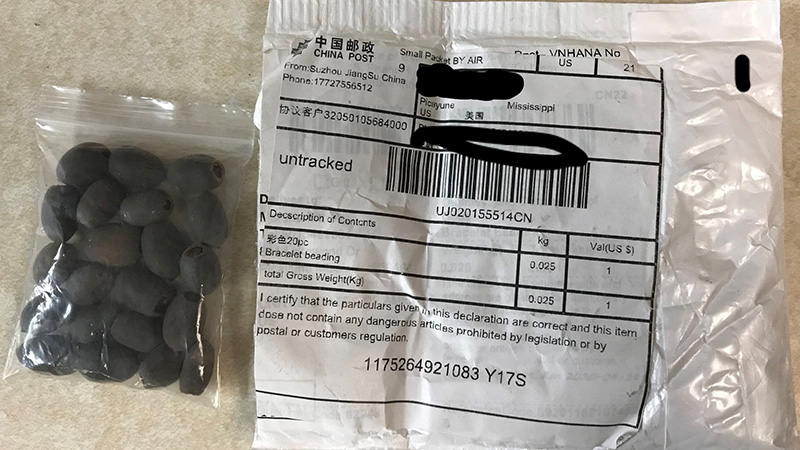 Across the U.S., people are receiving unsolicited packages of seeds in the mail. Some of these mysterious packages are now showing up at addresses in Pearl River County.

“People have suddenly, mysteriously been getting these packets of seeds in the mail from China,” Dr. Eddie Smith, Pearl River County Extension Service agent, said. “They did not order them. They just were sent to them.”

Smith said the seeds come in plastic bags, which are unlabeled.

“One of the first concerns is any plant material that comes into the United States is supposed to be inspected,” Smith said. “They check them for diseases and also they check to make sure they’re not an invasive species that could hurt our environment. It’s a concern because we don’t know what these seeds are. We don’t know if there’s any diseases on them.”

Smith said Mississippi already has invasive plants that have originated in China.

It is not currently known why the seeds are being sent the U.S., which is why it is important that anyone who has received an unsolicited package of seeds in the mail turn them in along with the envelope they came in at a designated drop-off location for further investigation.

The Pearl River County Extension Service office has been designated as a drop-off location for the seed packets. Residents can drop off the seeds at Smith’s office, located at 401 West Lamar St., Poplarville, Monday through Friday between the hours of 8 a.m. and 5 p.m. The seeds will be turned over to the Bureau of Plant Industry for investigation.

“Any time you mysteriously get something in the mail that you did not order, that should throw up red flags, because you don’t know anything about the product,” Smith said.

The descriptions on the outside of the envelopes do not match the contents. Some of the packages are labeled as jewelry or tools when they actually contain seeds, he said.

According to information from the United States Department of Agriculture website, a possible explanation for the mysterious seeds could be something known as a brushing scam.

“At this time, we don’t have any evidence indicating this is something other than a ‘brushing scam’ where people receive unsolicited items from a seller who then posts false customer reviews to boost sales,” the website states.

The website states that USDA is currently testing the contents of seed packets that have been turned in to determine if they contain anything of concern.

“It’s important that people turn them in because we’re collecting these and they’re using the packing information and they’re trying to figure out where they’re coming from specifically.”

Smith also said people should not plant the seeds.