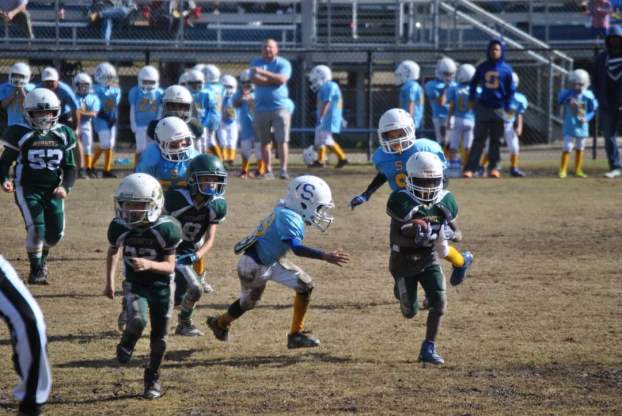 Holding Out Hope: The Poplarville Athletic Association is moving forward with plans to have a fall season even with the pandemic ongoing. This photo is from the7-year-old and 8-year-old championship last season.

The Poplarville Athletic Association will be having registration the next two weekends for fall football and cheerleading as the organization looks to move forward with the upcoming season.

Community members can sign up at Bill Watson Memorial Ball Park, located at 968 Old Wiggins Hwy., Poplarville, between 8 a.m. and 12 p.m. for fall football or cheerleading on Aug. 8 and Aug. 15.

PAA Secretary Martin Walker said the tentative plan is to form teams following the registration period, and then have a jamboree game on Sept. 12 with the regular season starting the following weekend.

The PAA’s COVID-19 guidelines are going to mirror those implemented by the Mississippi High School Activities Association for high school sports.

Attendees won’t be allowed in without a mask, all workers present at the games will be wearing a mask and gloves and there is also the possibility of coaches wearing masks while on the field, but Walker said that wasn’t set in stone yet.

Walker said when athletes and their guardians come to sign up for the season they will also sign a COVID-19 liability waiver, so that if a player were to be exposed to COVID-19 the organization won’t be held liable.

Walker said the process of what to do if a player tests positive is still in the works, and that each situation will be handled on a case-by-case basis to ensure fair rulings.

The Premier Youth Football League, the league the PAA participates in, will handle each case individually, if a positive case was to occur, and come up with the proper next steps at that time.

Prior to this year the PAA had been growing in size, reaching 90 football players last season.

Because of the trend, Walker said it would’ve been expected to see even more kids participate this year, but with the pandemic still ongoing it’s unknown if participation will be the same.

“I know just from hearing talk around town that there are still people not willing to come and play. It’s just a give and take on that,” Walker said.

Walker said PAA’s board decided to go ahead and put on a season because of its positive impact on children.

Some of the athletes may not have done anything active since school ended months ago, so the possibility of providing children with a physical outlet was important.

“It’s kind of a way to get kids out there to socialize because a lot of kids who play football we don’t see in the other sports at the park. It’s just really to get them out there and give them some normalcy,” Walker said.

PRSC moving forward with plans for a fall season

The Pearl River Soccer Club is tentatively progressing with the intention of having a fall season, but there are a... read more