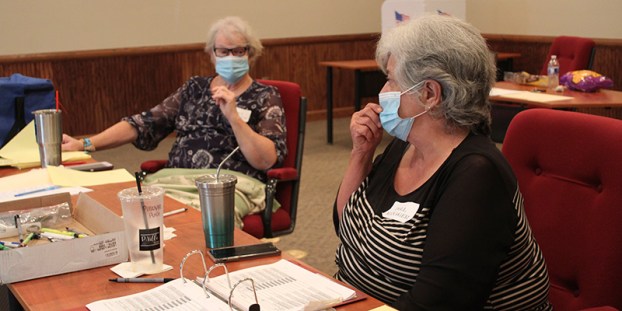 Low turnout: Poll workers in Poplarville man an election place in City Hall during Tuesday’s Mississippi Power Company vote to lock in the franchise fee for the next 25 years. Less than 100 people voted in each municipality’s vote. Cathy Cook | Picayune Item

Mississippi Power will continue to pay both the cities of Picayune and Poplarville a 3 percent franchise fee based on the unofficial counts from Tuesday’s vote.

In Poplarville, a total of 54 votes were cast according to the unofficial count, of which 50 voted for keeping the fee at 3 percent and four voted against. Only two absentee ballots were cast, City Clerk Jane O’Neal said via email.

In Picayune, 87 voters cast ballots according to the unofficial count, of which 79 voted to keep the 3 percent rate, while eight voted against.
The franchise fee percentage should remain the same for the next 25 years, the length of the franchise fee agreements. Voters could have allowed the power company to pay only two percent of electricity sold to a city, the minimum outlined by the Mississippi Public Utilities Act. Mississippi Power has been paying 3 percent in franchise fees for the last 50 years, said O’Neal.

Both cities would have received less money from Mississippi Power if citizens had voted no. The agreement generates approximately $170,000 to Poplarville per year, said O’Neal. The revenue helps provide essential city services, she said. According to a Facebook post from City Hall, the City of Picayune would have lost $175,000 in annual revenue if the measure had failed.