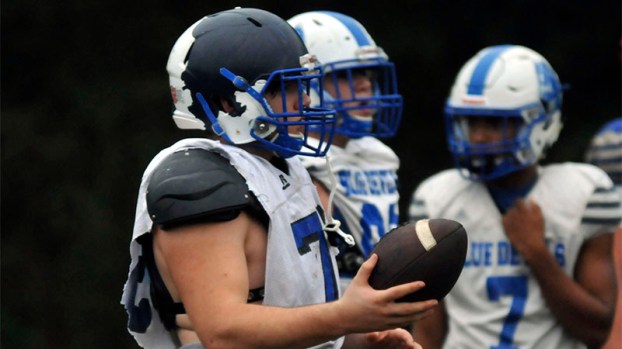 New Rules: In the MHSAA's regulations regarding fall football practices it's stated that practices with full pads can't take place until the sixth day of practice. File photo by Jonathan Mitchell.

The Mississippi High School Activities Association released a set of policies and regulations for football coaches to follow as full contact practices start.

Just like when athletics in general first restarted June 1, a 14-day acclimatization period is required for all athletes starting Aug. 17.

For the first two days athletes will only be allowed to wear helmets along with their normal athletic gear.

Then after two days in helmets players will be able to put on shoulder pads, with full pads coming out on the sixth day of practice.

Contact will be limited in order to maintain athlete health during the preseason portion of the fall.

Executive Director of the MHSAA Don Hinton said the reason for these restrictions is to try and minimize the risk of injuries before the season begins.

It’s something the coaches are used to adhering to, although they now have to do it while practicing during a pandemic.

“That came from over the past five years when they’re talking from the standpoint of limiting contact in practice instead of hitting like we used to. That came about not only in the NFL and NCAA, but also through the high school ranks to limit concussions,” Hinton said.

Hinton said because of the heat and humidity of Mississippi, having an acclimatization period is vital to athletes’ health.

However, there are now some new challenges to overcome with programs not being able to share water bottles because of COVID-19 regulations.

Hinton said programs are adapting and making sure their athletes stay hydrated in a safe and sanitary way.

“Our coaches and kids were already doing most of that. That’s a common sense approach and we reinforce those things the coaches are doing,” Hinton said.

The process of determining the timeline of practices and games for football was discussed heavily before being announced in mid-July.

Currently practices can start Aug. 17, a scrimmage or jamboree game may take place Aug. 28 and then the first day for competitive games is Sept. 4.

Hinton said that schedule, along with the two-week delay in competition, was put in place in order to give school districts and their football programs time to come up with a plan of action for the season.

Because more information about COVID-19 emerges every day, the MHSAA wanted to make sure teams had plenty of time to adapt, learn and implement the best possible policies.

“We felt like the two week delay would give us a little more opportunity to see what’s happening with the virus, give schools the opportunity to get back in session and have more time to make those decisions,” Hinton said.

The Picayune School District will be offering a livestream service for fans who want to watch the district’s teams compete... read more