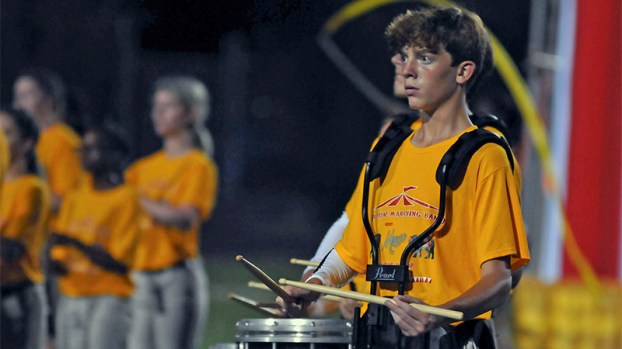 An unusual summer saw some sense of normalcy return when marching bands for Poplarville, Pearl River Central and Picayune began hosting camps the past two weeks.

Band Director John Cockrell said the musicians were split into sectionals during both the marching and music reading portions of the camp in order to limit the number of people in a single area.

The splintered approach allowed for the band to get a significant amount of work done during the two weeks of camp.

“There’s a whole bunch of different things that have to come together. We have one third of it done, and when school starts we have to learn the rest of the sets and the rest of the music,” Cockrell said.

Coming into the band as a freshman can be a daunting task, which is why there is a two-day beginner’s camp held for incoming musicians prior to the start of the actual band camp.

However, with the COVID-19 regulations and uncertainty regarding the school year, the pressure has only increased on the younger students.

Cockrell said the upperclassmen were important parts of this year’s camp because they showed the younger musicians how things were done and helped put their minds at ease during this unusual summer.

“I think they looked to the upper classmen, saw what was expected and jumped right in,” Cockrell said.

Cockrell said with school starting back up there would be full band practices on Mondays and Thursdays as the program looks to have the show completed by the end of September.

There won’t be any competitions to take part in this fall, and it’s unknown what the situation will be like regarding football games, but the band is nonetheless moving forward and enjoying each other’s company while doing so.

“It was nice to have the kids back up there. I think the kids enjoyed being back up there with their friends and doing what they love doing,” Cockrell said.

For Poplarville, the set up was much the same as Picayune’s when it came to the program’s band camp.

The first week focused on fundamentals, while the second week revolved around the show and learning the music.

Band Director Ken White said the majority of work took place outside to allow for social distancing and help with COVID-19 prevention. Even with the guidelines in place, White said it was important to try and make the camp feel as normal as possible for the musicians given the circumstances.

“They know we’ll roll with the punches. Things we’d normally do we can’t do, so we’re just trying to get them to have some normalcy in their life,” White said.

PRC’s first week of camp consisted of only the dancers, color guard and percussion musicians seeing as those areas of the show needed the most amount of time to get back in the rhythm of things.

“During that week for dance and guard we were focusing on fundamentals and learning some choreography mixed in. We’re adding new people to percussion instruments they’ve never played before so they need extra time to learn fundamentals as well,” Band Director Kelcey Becnel said.

Students got their show music in April so Becnel said the musicians arrived at camp with a solid knowledge base to build off of as the year continues.

“The kids showed up to camp having a good understanding of how the music was supposed to be performed. They knew their music so we were able to work on the finer details (of the show),” Becnel said.

The program has been affected by COVID-19 in obvious ways like having to work around the health guidelines already in place. However, another big change the program will have to adapt to is the loss of class time during the day.

Becnel said because of the school schedule for the upcoming year her band would only be able to meet after school.

It may not be the best-case scenario, but Becnel said she’s making sure her musicians stay positive throughout the process.

“We’ll be meeting after school, but I told my kids some band is better than no band at all and they’re still able to do what they love. We’re looking forward to having the best season we can possibly have. The kids are doing a fantastic job of having a positive attitude,” Becnel said.