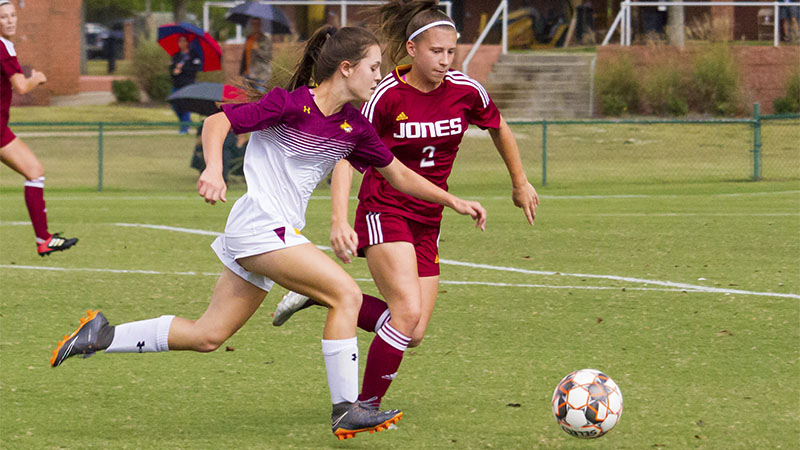 One On One: Jade Shaw looks to get past a defender during a game last season. Submitted photo.

Pearl River Community College’s women’s soccer team plans to make the most out of a season that has been delayed to the spring.

That delay of the season came on July 13 when the National Junior College Athletic Association moved most fall sports to the spring semester because of COVID-19.

The team will start holding practice sessions following the athletes’ arrival this weekend, and will be allowed to have full training sessions under the NJCAA’s guidelines.

There are also three play dates that will be allowed for the Lady Wildcats where they can schedule a scrimmage with an outside team.

Head Coach Henrik Madsen said that schedule is still in the works because the program wants to see what teams, such as the University of Southern Mississippi and other possible opponents, end up doing this fall.

While the decision to move fall sports to the spring puts Madsen and his program in an unprecedented situation, the coach said it wasn’t all that surprising when the NJCAA made its announcement.

“I don’t think it was really a surprise. I was really more worried about getting started on the season, getting halfway through and then cancelling it, (because) there goes my sophomores’ eligibility for that year,” Madsen said.

The program will follow the NJCAA’s COVID-19 guidelines, such as social distancing and other health protocols, but other than that Madsen said training wouldn’t be all that different since soccer is an outside sport.

However, the actual plans of the training sessions will change because of the delayed start.

Normally the athletes would only have a couple of weeks to get back into the flow of things before the season began.

This year there will be more time to get the athletes in shape, while also working on formations and tactics.

It’s a situation Madsen and his players have never been in before, but the delayed start may benefit the team.

“From a soccer perspective it’s almost ideal for us as coaches. We can implement our playing style, tactical formation and just have a lot more time to implement things with the whole team,” Madsen said.

While some programs may be hit harder financially by the delayed start to the season, Madsen said his program will be fine thanks to the support of the college.

Instead, a bigger worry is helping the athletes garner attention from four-year universities.

Madsen said usually coaches at four year universities will scout in the fall in order to attract a player to sign up for the following spring semester with their team.

However, with the junior college season not starting until the spring, the worry is the players may not get the same amount of attention as before.

The delay serves as a double-edged sword for the program, with Madsen saying both the players and staff are affected in a multitude of ways by the NJCAA’s decision.

“I think it’s better for the coaches.”

“It’s tougher for the girls because they have to wait so long, but it’s ideal for us as far you setting up your team,” Madsen said.