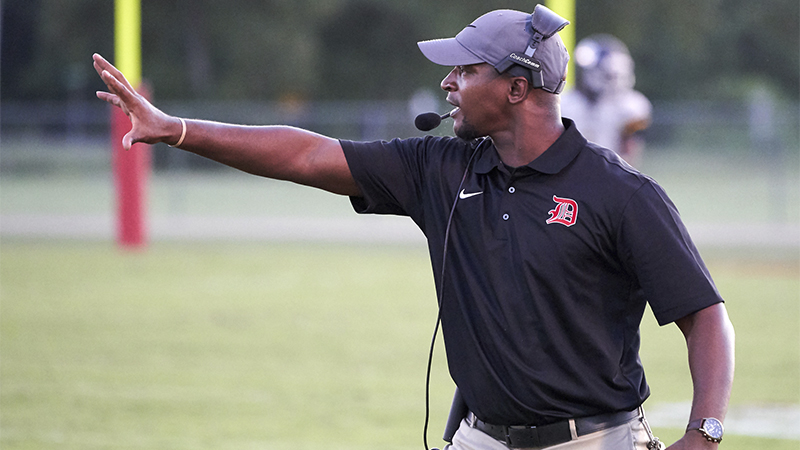 On The Sideline: T’Darryl Grays shouts instructions to his secondary during a Mississippi Delta Community College football game.

It’s no wonder after spending his high school playing years under the tutelage of legendary football Coach Dodd Lee that T’Darryl Grays would follow in Lee’s footsteps to become a coach himself.

Grays was a cornerback for the Maroon Tide before continuing his playing career at Southeastern Louisiana University.

Grays first collegiate coaching experience came at Mississippi Delta Community College where he spent three years working with the defensive backs and special teams units. Now Grays has made the move to East Mississippi Community College, a team that has won five NJCAA national championships over the past nine years.

Grays will once again work with defensive backs and special teams while also coordinating the team’s strength and conditioning workouts.

Grays said his playing days with Coach Lee helped him develop into the coach he is today with EMCC.

“He makes it tough and you need that to be able to go through certain things in life. To have that toughness and grit, that mental capacity to be able to deal with anything that comes your way,” Grays said.

Grays started playing football as a 9-year-old and knew he’d always be involved in the sport, so even after originally planning on going into kinesiology and sports science in college, coaching became his passion.

Grays said joining EMCC was an easy choice because of the winning culture.

Head Coach Buddy Stephens has built a program where winning is expected, and Grays wants to be a part of that mindset.

“I came here and want to contribute to the Lions and EMCC’s success. I want to use every insight and input I have to win a championship, guide young men and get them to the next level,” Grays said. Grays said he’s faced a variety of trials and tribulations during his life, with football being the one constant.

Now he’s using his passion for the game to help others the same way it helped him.

“I had a journey I will say. Going into my senior year of college I lost my mom and my dad. I think if it wasn’t for football and learning how to persevere, things could’ve gotten dark for myself. Now I feel like I can accept any challenge, deal with adversity and come out on top,” Grays said.