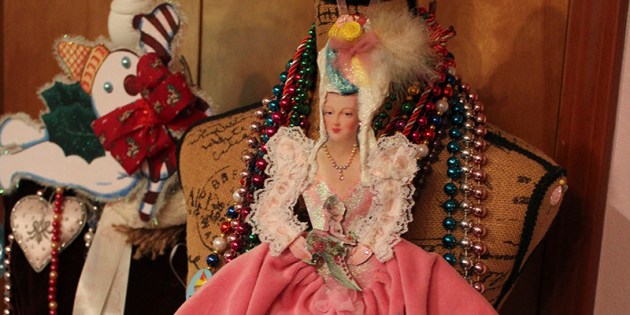 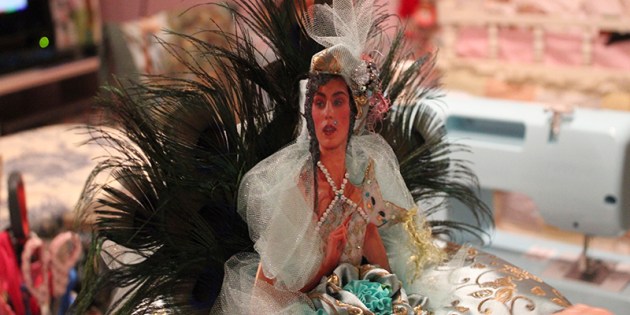 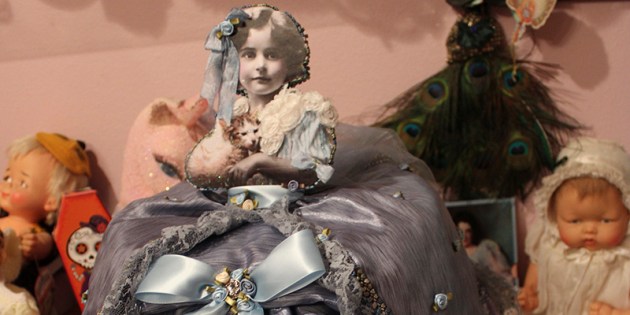 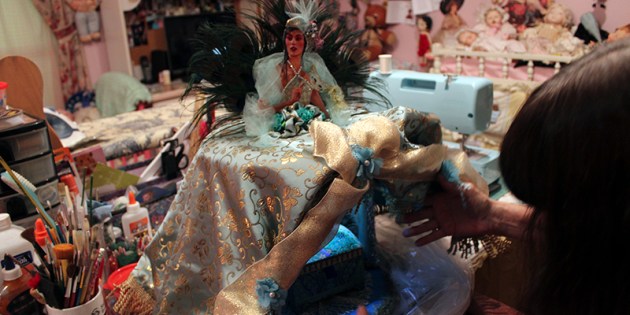 shimmer and Shine: Whitman’s paper dolls are decorated with shiny fabrics and painted with glitter to give them iridescence. The skirt of this theater doll houses a jewelry box. Cathy Cook | Picayune Item 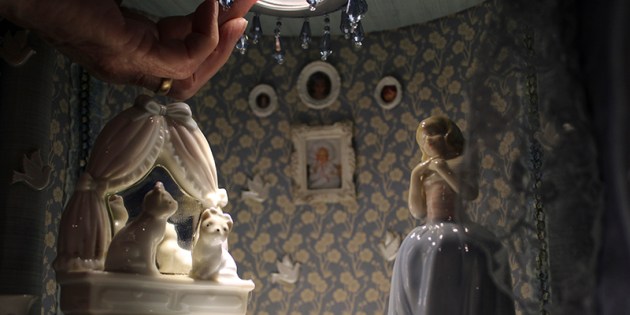 Theater dolls are a tradition that go back more than 100 years, but Marie Whitman has her own approach to the craft.

On Whitman’s sewing table sits a doll made of paper, peacock feathers, glitter and cardstock. Her heavy fabric skirt conceals an elegant room in miniature—a curved wall made out of foam board with gold bedecked wallpaper, tiny gold framed mirrors and a chandelier made of beads and powered by batteries. At the center of the miniature room, like a secret treasure chest, is a jewelry box, decorated in gold and green to match the doll’s dress.

She crafts both theater dolls, with paper heads instead of porcelain and dramatic skirts that contain a scene within, and large paper dolls whose two dimensions are decorated with three dimensional embellishments.

“I burnt my kitchen down,” she said. “I didn’t have anything left in my kitchen at all.”

After hearing about the incident, a friend sent her new plates and a paper doll. The gift inspired Whitman to create her own dolls. Other friends taught her about embellishing paper crafts with their own paper creations.

Peacock feathers are almost a signature in Whitman’s work. She makes skirts out of the iridescent feathers, giving the dolls extra texture and shimmer.

“If you didn’t have your own peacocks, you couldn’t afford to make them,” said Whitman.

She gathers the feathers from her flock of peacocks and has a bathtub full of feathers waiting to be used.

Marie Antoinette, with her powdered wigs and lacy gowns, is another theme in Whitman’s work.

While Whitman has created many theater dolls, been able to show some in art shows and sold others, she is on a hiatus from making them. Most of her crafting is focused on paper dolls and Christmas collages, which are easier on her hands.

Whitman is a Mr. Bingle fan. She remembers visiting Canal Street on Saturday mornings as a little girl to watch the mascot come out during the Christmas season. When fellow fans send her prints or copies of old Maison Blanche advertisements for her crafting, she decorates two sets—one for her and one to send back to the person who found the ad.

Whitman has plans for a new theater doll—something she’s never tried before, a baby doll with a fuzzy blanket dress. But after facing some personal losses, she isn’t ready to return to making theater dolls. Instead she’s focused on collages packed with Christmas iconography: Santa Claus, candy canes and reindeer. Like her paper dolls, the collages are brushed with glitter to make them shimmer.