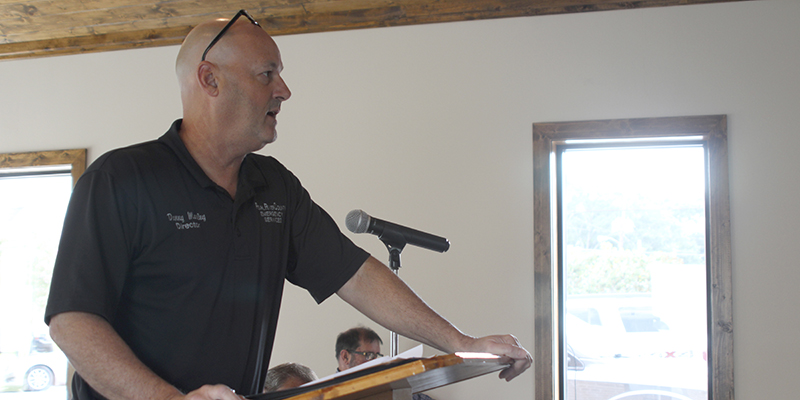 Equipment maintenance: County Emergency Management Director and Fire Services Coordinator Danny Manley asked the Board of Supervisors to approve a purchase order for a new fire truck for the Nicholson Fire Department.

Pearl River County has $54,000 in grant funding for opioid abuse prevention and may receive another $54,000 if the county can demonstrate positive results from the program.

The grant is from the Mississippi Institute for Health, Nuria Arias, county grant writer, informed the Board of Supervisors at their regular meeting Monday. The grant is being used to start a coalition in Pearl River County that will work on opioid abuse prevention, said Arias. The county has been working with First Baptist Church to begin the advisory board.

The advisory board is working with a state marketing agency that was recommended by the Mississippi State Department of Health to develop slogans for the county. Billboards should be going up soon around the county, Arias said.

An officer from the Sheriff’s Department is also hoping to provide education on opioid abuse prevention in the local schools. The grant is also being used to create a resource directory for people facing substance abuse issues in the county.

Use of the funds was delayed by the pandemic, but the grant started in June and will finish in August. Another three-month program will begin in September. Pending the county’s performance with the grant funds, the county will receive an additional $54,000 to put toward opioid abuse prevention.

The grant application process has been slowed due to the pandemic, said Arias. She is working on several other grant applications for the county, including an application for a $30 million economic development grant from the federal government.

In a separate matter, the Board approved issuing a purchase order for a new fire truck for $276,456 from Deep South Fire Trucks for the Nicholson Volunteer Fire Department. The department is applying to the Rural Fire Truck Acquisition Assistance Program to help pay for the purchase.

Board members Hudson Holliday and Malcolm Perry said they’d heard from local volunteer firefighters that some volunteer departments save their funds instead of using them to purchase needed gear, and asked if the Board should send out some guidance regarding the issue. Fire services coordinator Danny Manley said that sometimes he does see departments that are so glad to have funds that their boards attempt to “band aid” gear together.

The Board entered executive session to discuss economic development and personnel matters.

—Held a public hearing for Tax Objections for 2020 Assessment Rolls. So far the county has only received a few objections, said County Administrator Adrain Lumpkin.

—Approved interlocal agreements with the city of Picayune for the E911 consolidation and to house Picayune’s inmates at the county jail.

—Approved naming a bridge on Anchor Lake Road after John Lumpkin. Lumpkin built many bridges in the county before he passed away two weeks ago, said Holliday.

—Approved the hire of Theressia Lyons as Assistant Public Defender. She previously worked as assistant public defender in Harrison County.

—Approved a scanning program system for Justice Court from Harris Delta for $5,500 in license fees, with a $210 monthly maintenance cost and $150 training cost. The system will allow Justice Court staff to digitize records. The court has spent $4,000 on filing cabinets in the current fiscal year, according to a letter from the Justice Court Clerk Kathy Mason.

—Approved the final payment to Hanco Corporation for $181,254 of the $7.2 million contract for construction of the County Courthouse Annex.  Holliday commended the County Administrator, the architecture firm and the contractor for only incurring a $3,183 change order over the course of the project. The project had a change order increase costs by $61,354, but also had a change order reduce costs by $58,171, so it was only $3,183 more than the original contract sum.

—Ratified a $1,500 check for a courthouse podium for the County Courthouse Annex from Magnolia Cabinet Works.