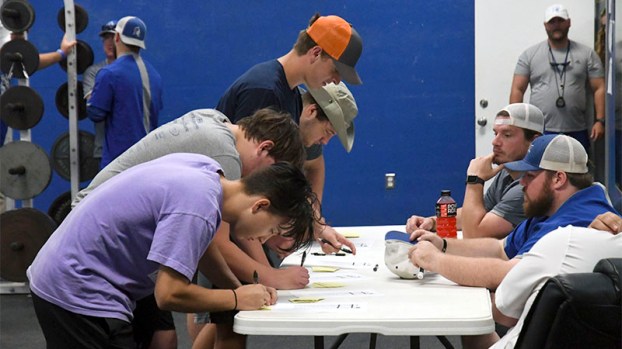 Baddest Devil: Following the naming of Brady Johnson as the Baddest Devil, PRC football players voted on who to elect as the other team captains. Photo by Jonathan Mitchell.

Local football programs wrapped up summer practices this past week with the imminent start of school on the horizon.

Practicing under COVID-19 guidelines presented some challenges, but the programs were able to adapt and overcome as they prepared for the upcoming season.

The Poplarville Hornets finished off their summer practices with the Iron Man competition.

In that competition, athletes compete against one another as they go through a series of weight training exercises and agility drills.

Depending on the player’s performance in each test they’ll accrue points that are tallied up at the end of the competition.

The athlete with the highest score is named the Iron Man and is automatically made a team captain.

The team then votes as a group to determine who the other three captains will be.

“I think a lot of them make it a goal of theirs as a freshman or sophomore. To be on that list takes years of work. Some guys have to work their butt off for three years before they ever get on the list,” Beech said.

The competition also provided some routine and normalcy for the players who have had anything but a normal summer.

It’s a sign that the season is fast approaching, and Beech said his players are ready to get on the field and compete.

“I think it was good for them. Most every one of them were excited to get in here, compete and get their mind off of craziness going on outside of them.”

The team captains for the Hornets this year will be Torry Polk, Greg Swann, Seth Ladner and Tyler Knight. Swann also earned the title of Iron Man.

The Blue Devils ended their summer with the Baddest Devil Week, a competition similar to Poplarville’s Iron Man.

Head Coach Jacob Owen said the week serves as a proving ground for his athletes, as well as a way to determine the team’s captains. The honor of being a team captain isn’t given lightly, and Owen said it’s something the senior athletes strive for.

However, given the strange circumstances of the summer practices and delayed season, the leadership role of captains has changed.

“It’s something they look forward to and something seniors want. They want to be looked at as a leader and especially during these times it’s even more important. They’re going to have to model things that other captains in the past didn’t have to model,” Owen said.

The competition wrapped up a summer of practices that has Owen looking forward to the start of the season.

Given the work ethic and progress the staff has seen over the past two months, and the choices made to determine who will represent the team as captains, excitement is building within the program as the season draws near.

“If a team notices positive attributes and those are the guys they select it’ll be a successful team. I think it’s just a precursor of what we’ll see on the field this year,” Owen said.

The captains for the Blue Devils this year will be Brady Johnson, Roddie Powell, Cam Brunson, Branson Logan, Ty Herring and John Linden. Johnson was named the Baddest Devil.

Picayune focused on conditioning and weight lifting this summer as the players tried to make up for lost time. While the other two programs name their captains for the entire season, Picayune Head Coach Cody Stogner said the Maroon Tide take a captain by committee approach.

The players representing the team can change on a weekly basis, which is based on work ethic, dependability and performance. Those factors determine who is captain for that week.

“We might have a captain one week and not the next week. If you’re doing what you’re supposed to do, leading by example and doing everything right in the classroom then you are a captain,” Stogner said.

Stogner said there’s been a healthy amount of competition within the squad as the players push each other to new heights in preparation for the start of competition.

Athletes are taking charge and working hard to prepare for the season, no matter how long it is or what obstacles get in the way.

“They’re doing the best they can to make sure we’re in the best shape we can be. They’re more excited about getting school started and the season started because it’s normal to us. It’s what we do. Some guys are built different. They like to compete and get after each other,” Stogner said.