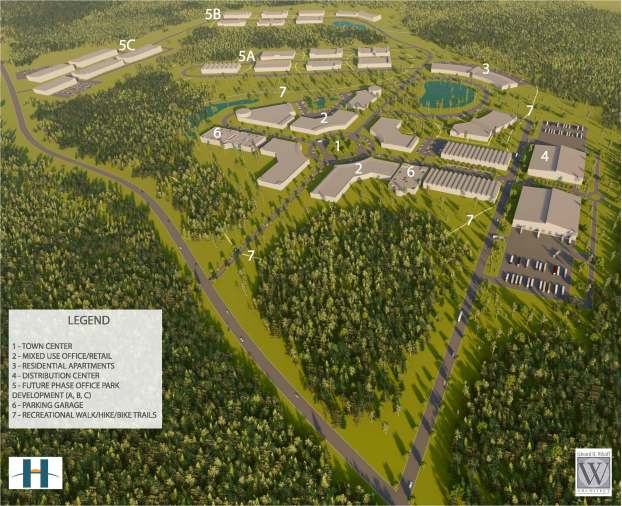 A rendering of the proposed industrial park along I-59. Submitted photo.

Pearl River County will apply for Gulf Coast Restoration funds for three projects on Friday, which includes extending Ridge Road, land acquisition for a proposed industrial park along I-59 and an aviation hanger and pilot training facility at the Poplarville airport.

The Legislature will decide which projects from the lower six counties to award funding to in the 2021 legislative session, after the Gulf Coast Restoration Fund advisory board reviews projects and makes recommendations. The county also applied for funding for all three projects in 2019.

The project would relocate the Ridge Road and Highway 43 connection east and extend Ridge Road to Airport Road. The goal would be to reduce traffic congestion along Highway 43, I-59 and the frontage road, and to connect Highway 43 directly to the airport, states the application.

A proposed second phase would connect Ridge Road to Mississippi 603, providing a direct route from Stennis Space Center to the Picayune airport, but the funding request would only be for phase one.

The county is asking for $11.2 million, which would require $2.8 million in matching funds. According to the funding application, the county would use already secured federal funds and state aid funds to pay for the match.

The project is envisioned to allow safer access to the businesses on the Frontage Road, create space for new urban development, improve access to the Crosby Arboretum and allow for more development of the Picayune Airport by improving its accessibility.

The application states that the county has already put $1 million of federal and state aid funds into environmental and design phases of the project, while Picayune has put $200,000 toward repairs and improvements to manage the congestion on Frontage Road.

The proposed industrial park would be along I-59 and is envisioned to attract public/private partnerships with large retailers that want to build a distribution center or warehouses, according to the application. The park could also potentially attract industries like aerospace, aviation and defense opportunities, since the county is in close proximity to Stennis Space Center, the application states.

This project would include building an aviation hangar and a training facility at the Poplarville/Pearl River County Airport that would be used by the Pearl River Community College as part of pilot training programs.

The funding request is for $1 million and would require a $250,000 match from the county. According to the application, the small size of the airport suits it for pilot training and small aircraft certification testing, as it has less volume of aircraft.

The Pearl River County NAACP will be giving away school supplies in Poplarville’s Town Greene from 1 to 4 p.m.... read more