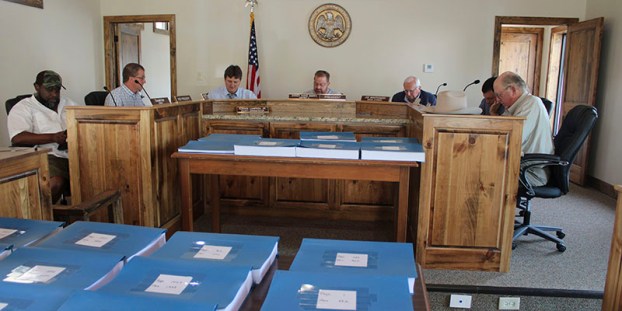 The Pearl River County Board of Supervisors approved striking a 2017 tax sale to simplify ongoing litigation at an emergency Board meeting Wednesday. Photo by Cathy Cook.

The Pearl River County Board of Supervisors held an emergency meeting Wednesday to strike a tax sale in an effort to simplify ongoing litigation.
Board Attorney Joe Montgomery said two property owners with adjacent properties in the county are in litigation over who owns 70 feet of land.

Tax Assessor Gary Beech explained that there was also a mix up about which deed corresponded to which property, which is a problem as one property is a vacant lot while the other has a home on it.

One of the properties had been sold in a tax sale, which was set to mature Thursday, so Montgomery asked the Board to meet Wednesday and void the tax sale from 2017 to make it simpler for the purchaser to get their money back and simplify the ongoing litigation.

One of the property owners is suing their neighbor, along with the county and the company who owned the property prior to the tax sale.

Lumpkin asked the Board if it would consider renovating another building the county owns to move his office into, so that there would be more space in the courthouse for the Circuit Clerk’s offices, and more rooms for attorneys to meet with clients in the courthouse.

Circuit Clerk Nance Stokes said she needs space for at least one, possibly two more people in her office in Poplarville. Stokes said there is plenty of space in the Picayune office, but as court is held in Poplarville, she needs more of her employees in the courthouse.

Board members said they were not sure renovating the additional building would be feasible.

They agreed that the architect and contractor should look into the cost of expanding Stokes’office and adding a small new building for offices for payroll and the county administrator.