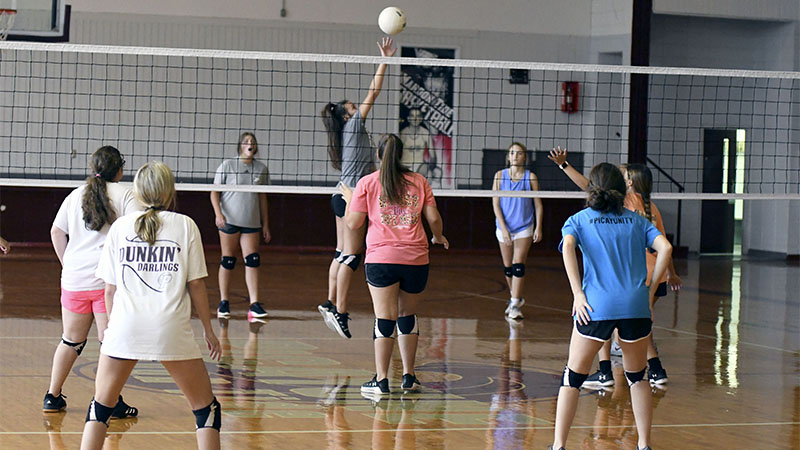 At The Net: Junior Jolene Beck leaps up to tip the ball over the net during a Lady Maroon Tide practice. Photo by Jonathan Mitchell.

The Mississippi High School Activities Association may have delayed the fall sports calendar by two weeks, but local volleyball programs are working overtime nonetheless as they prepare for an unusual season.

New Head Coach Robin Jeffries has had a bit of an adjustment period with her players as she takes over the volleyball program.

This will only be the volleyball program’s second year, so there was still a lot of groundwork for the athletes to establish as they worked towards the start of the season.

There have been some strategic changes made to the team’s line up, but Jeffries said she’s made sure to include her athletes in the decision making process.

It’s a team sport at the end of the day, and there’s a balance between implementing a new system and making sure the athletes are comfortable in their positions.

“I asked for a lot of input. I use my upper classmen to help make decisions and I really include them. I’m not there as coach to force something on them. I want them to play freely, have fun and enjoy it,” Jeffries said.

It’s been a learning process this summer as Jeffries and her team have adapted to one another.

Team chemistry has been an important aspect of evaluation during the summer period because it helps Jeffries understand what combinations of players will be the most competitive when the season begins.

“When you put the picture together you have to be able to play together, react to each other and you just begin to flow. You’re always going to have the strengths and weaknesses of each player and hope they play off one another,” Jeffries said.

This will be Picayune’s third year to have a volleyball program, and because of that Head Coach Courtney Dickens has started practices with more advanced drills than had been done in the past.

Conditioning and weight lifting has also been a big part of the offseason with Dickens wanting her athletes to be able to go five sets every game and still have the energy to perform well.

Dickens said the effort has been good and her players are giving it their all as they look ahead to the start of the season in August.

“Attitudes have been great. They’ve been really exited to be there. They lay out on the court, but I’ve never had to force them to do that. I’ve been very fortunate with them,” Dickens said.

The delayed start to the season means the Lady Maroon Tide will lose out on several games, including a jamboree, which is where Dickens typically figures out her team’s best starting line up.

There are 27 players on the squad, and the early season games and jamborees serve as a way for Dickens to evaluate her talent before district play begins.
“I hate that we’re not getting to go to a jamboree because that’s a big asset for us. We try to get as many kids in as we can, and sometimes we play kids in different positions to see what they can and can’t do. It gets them ready for the first game,” Dickens said.

Instead Dickens and her players will have to make the best of an unusual situation.

Still, the delay hasn’t affected Dickens’ expectations for the upcoming season as she looks to build her program into a powerhouse.

“I know with the circumstances we lost some games, but to me the expectations will be the same because everybody is in the same situation,” Dickens said.

Volleyball competition will be allowed to begin August 24.