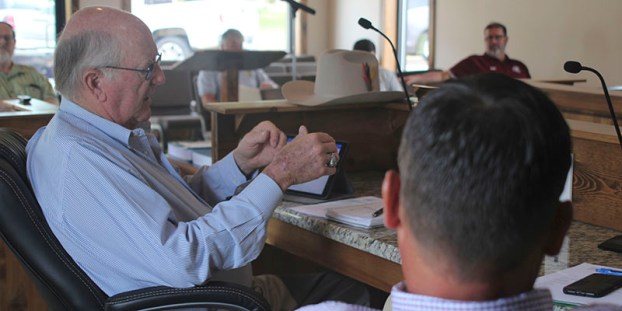 Pre-planning: District II Superivsor Hudson Holliday asked the Board of Supervisors to develop an ordinance preventing the establishment of bars outside of incorporated areas within the county in the event that a liquor referendum is passed in the future. Photo by Cathy Cook.

Supervisors prepare for liquor on ballot

VFW Post 3804 in Picayune is facing challenges due to the pandemic, Commander Ronnie Stogner told the Pearl River County Board of Supervisors at their regular meeting Monday.

“Anything will help so we can help other vets and other people in our community,” he said.

The Board directed county Economic Development Council Director Blaine LaFontaine to see what funds might be available to assist nonprofits.

In a separate matter, the Board discussed creating an ordinance to address alcohol sales in the county. District III Supervisor Hudson Holliday brought up the issue, because he is concerned that making beer and liquor sales legal in the county may end up on the ballot in November.

According to previous coverage, Holliday has heard from local business owners that they are attempting to put together a petition to get a countywide liquor referendum on the ballot in November.

Holliday proposed the Board pass an ordinance so that if alcohol sales in the county become legal, sales would be limited to restaurants and stores, preventing bars from opening outside of incorporated areas.

“I think it’s incumbent upon us to go ahead and put an ordinance in place,” said Holliday.

Holliday said he believes beer sales in stores should be legal, to allow stores in unincorporated areas of the county to compete with stores in Picayune and Poplarville that are already allowed to sell beer and wine.

Both District II Supervisor Malcolm Perry and District IV Supervisor Jason Spence voiced their support for an ordinance. An ordinance has yet to be drafted, but Holliday asked that the Board keep the issue “on the front burner.”

Beer is legally sold in stores and restaurants within the city limits of Picayune and Poplarville.

—Accepted the real and personal tax assessment rolls for 2020.

—Approved executing a $54,000 grant agreement with the Mississippi Public Health Institute to address substance abuse in the county. The project is supposed to last from June through August and is aimed at creating awareness and prevention campaigns, establishing a resource directory, training faith-based and community organizations on substance abuse and prevention, creating a community task force and creating videos and presentations with testimonials from victims of substance abuse.

—Board President Sandy Kane Smith updated the Board that no county bridges are closed at present, but the County Engineer has a list of bridges that need work, which he will present at the next meeting.

The next Board meeting will be Wednesday, July 15 at 9 a.m.

Tuesday night, Picayune’s City Council held a telephonic meeting where all members approved a motion to enter into an interlocal... read more