Summer games getting baseball players on the field 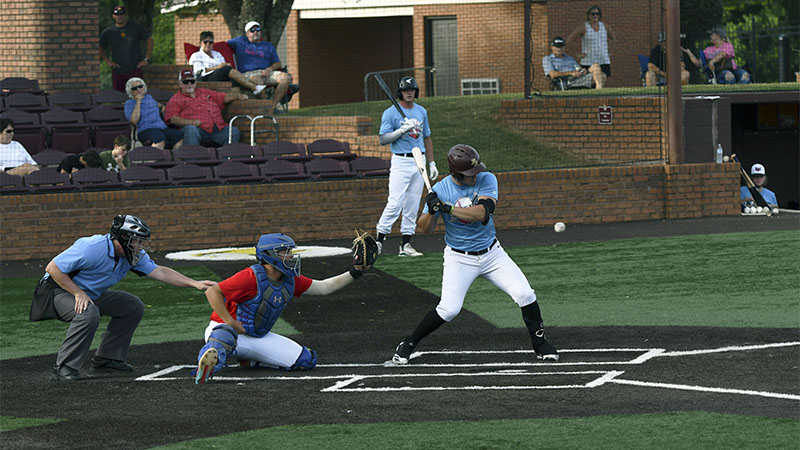 Good Eye: Right fielder Austen Izzio watches as a pitch goes high in the strike zone for a ball during a recent Southeast Collegiate League game. Photo by Jonathan Mitchell.

The Southeast Collegiate League hosted a doubleheader at Pearl River Community College Thursday evening that saw the Royals take on the Braves in back to back games.

The first game of the day saw the Royals run away with the score as the bats came alive to help the team see off the Braves 8-2.

It was a tied game after two innings, but the Royals’ offense got going in the third inning with the team scoring four runs to take the lead.

The Braves would score once in the top of the fourth inning, but two more runs in the fifth inning and another run in the sixth inning sealed the win for the Royals.

Hayden Dunhurst took the lead from his catcher position while Austen Izzio set up shop in right field.

Izzio ended up going 1-2 at the plate, while Dunhurst went 0-2 with a walk.

The second game between the two teams was a high scoring affair and a little closer than the previous match up, but the Royals were once again victorious, this time winning 11-7.

There were some position changes with Dunhurst splitting time at catcher and right field, while Izzio played at both right field and shortstop.

Both players were helpful offensively for the Royals with Dunhurst going 1-2 with a RBI and a walk, while Izzio went 1-4. Robert Dunhurst is the head coach of the Royals and he said liked the team’s improvement leading up to the two victories.

“Last night was by far our best performance. We hit the ball really well. We hit a few home runs (and) hit a few off the wall. I think we had, in two games, nine extra base hits. It was a great day for the kids,” Dunhurst said.

The team has played eight games now as part of the SECL and the players are starting to get their rhythm back after having months off.

Both offensively and defensively, Dunhurst has seen progress since the season began.

“(The batters) are just getting their timing back. Now they’re able to time up a fastball and not miss it. The pitchers are getting in better shape (too),” Dunhurst said.

Even as the players return to their normal selves on the field, there’s still work to be done.

Dunhurst said the team has 12 more games before the season ends, and he wants to make sure all of the athletes are prepared for the fall when they have to return to their college programs.

“Because the summer will run later than in some places, and they’re not going to have as much down time, our goal is to have them ready. We want them to be 100 percent and healthy when they get back to their college, so they can be as good as possible and help them with their placement on the team,” Dunhurst said.