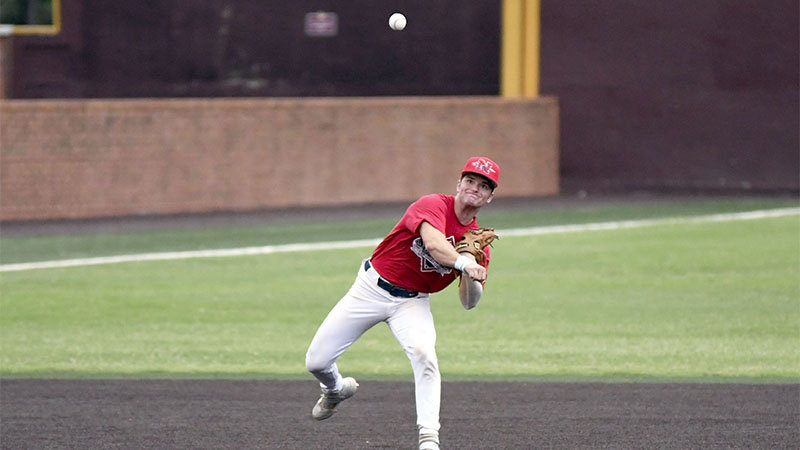 Good Glove: Blaise Breerwood fields a grounder and throws it across the infield to first base. Breerwood appeared in 11 games for the Poplarville Hornets before the season was cancelled and had a .588 batting average with one home run and 12 RBIs. Photo by Jonathan Mitchell.

The league is comprised of college baseball players ranging from incoming freshmen to seniors.

That day, Team Garner clinched a 2-1 win over Team Bartlett to move to 4-2 on the season while Team Parker had a convincing offensive performance beating Team Larson 6-3.

The main purpose of the league is to allow athletes a chance to get back on the field after having their seasons cancelled because of COVID-19.

Jonathan Parker said his team has been able to knock off the rust that accumulated during quarantine, and now the players are looking more comfortable on the field.

“They’re going out there now and having fun. They’re actually swinging the bat, being early and aggressive and having fun doing it,” Parker said.

Turnage, Smith and Tynes make up the Pearl River County contingent on Team Parker, but there’s also several other local athletes in the league, including Canaan Ray who has played for Team Bartlett during the league’s first couple of weeks.

According to the GameChanger app, which has the stats for the DSCL, Ray has appeared in three games with a .143 batting average to go with one RBI, three runs scored, two walks and a strikeout.

While Ray may not be on Parker’s team, the coach said there’s a specific aspect of baseball that every player should be working on during these summer games.

“I think with baseball in general, it should be consistency. You could come out and do well one game and then the next game come out and go 0-5. (There are) no excuses anymore,” Parker said.

Max Bartlett said the league is especially important for players like Turnage, Smith and Tynes who just graduated high school.

Not only do they get extra reps in to make up for their cancelled seasons, but they also go up against some of the best baseball talent in the state of Mississippi.

“This summer is a good time to play baseball and play baseball against good competition, especially against guys who have been in college. It’s good to be fresh when they go into school in the fall,” Bartlett said.