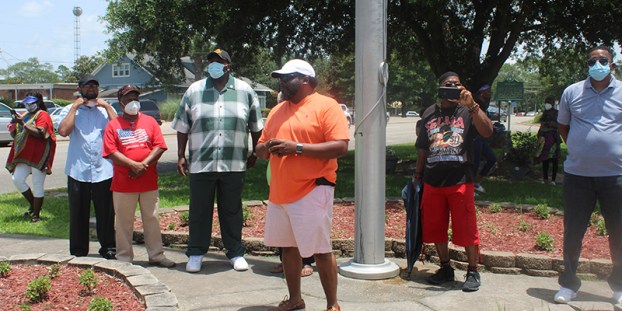 change on the way: Donald Hart, District I Supervisor, gathers with other public officials and leaders in front of City Hall in Picayune after the outgoing state flag with the Confederate battle emblem was removed from the adjacent flag pole. Cathy Cook | Picayune Item

The soon-to-be former Mississippi State flag featuring the Confederate battle emblem was taken down from public buildings in Picayune Tuesday.

It was decided Tuesday morning that the flag in front of City Hall would be taken down at 1 p.m., said Councilor Larry Breland. Other state flags on city property were expected to come down Tuesday as well, Breland said.

Despite the short notice, a large crowd gathered around the flagpole in front of City Hall Tuesday afternoon to celebrate the change. People recorded the event with their cellphones and applauded as the flag was lowered.

Some watched from cars parked nearby. Local politicians and religious leaders spoke to the crowd after the flag was lowered, folded and taken away.

On Sunday the Mississippi State Legislature passed a resolution to replace the flag. Mississippi voters will vote on a design for a new state flag in November. The new flag must not contain the Confederate battle emblem and must contain the words “In God we trust.” Governor Tate Reeves was set to sign the bill into law Tuesday.

“So many people that you see out here today, our parents and grandparents grew up here and they actually were citizens here, and I wish some of them could be here today to see what’s taken place,” said Hart. “They grew up and came up under the tyranny and oppression that this flag represented and so that being the case, I’m thankful that it’s coming down today.”

Pastor Vernon Robinson said he was thankful for the people who have been protesting locally in front of Picayune’s post office over the last month.

“We believe that it motivated the City Council and many other officials to realize that this was an offensive flag and it needs to come down, because it represents hatred and jealousy and slavery,” said Robinson.

Breland said that although a few passing drivers voiced their discontent with the flag coming down, he hopes that the change will help unify the city and the state.

“When we read the Bible and we profess to be Christians, there’s not a Black heaven or a white heaven, and if we can’t get along down here, we can’t make it up there,” he said.

Both Breland and Hart said that the change may help Mississippi economically and may allow for the growth of businesses in the state.

Hart said the county planned to take down the outgoing state flags on Tuesday as well.

Fireworks shows will be homebound

Fourth of July celebrations may be smaller this year as the size of group gatherings is still limited to prevent... read more