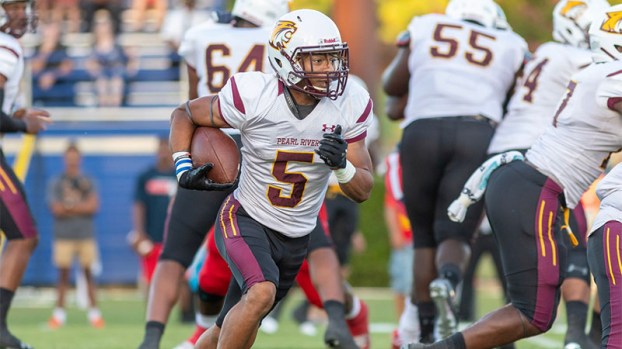 Ball Secure: TJ Wash takes a handoff and heads around the right side of the offensive line. Submitted photo.

It was unknown if the football program at Pearl River Community College would participate in a season at all this year, but due to a new ruling from the Mississippi Association of Community Colleges the season is set for a delayed start on October 1.

Originally the National Junior College Athletic Association had decided to move all fall sports competitions to the spring, but the MACC abstained from the vote in order to have more time to evaluate the spread of COVID-19.

After deliberation, the MACC came out with a plan for a delayed start to the football season while the rest of the fall sports like volleyball and soccer were moved to the spring.

Now PRCC is set to play a six game schedule against only divisional opponents starting Oct. 1.

Head Coach Seth Smith said the current plan is for athletes to arrive Aug. 14 to start practices, and that the delay didn’t affect his team’s plans that much.

“For us it’ll just push everything back two or three weeks, but once we get them here everything will be the same,” Smith said.

The MACC has preached the importance of the athletes’ safety and wellbeing in order for a season to take place in the fall.

Specific guidelines on how practices and games will work are still being developed, but because of the contact nature of the sport things like social distancing won’t be possible for the most part.

“Practice is practice, but have to do a better job in team meetings and in the weight room to make sure (you don’t have too many people),” Smith said.

What was originally set to be a nine game schedule for this year has been cut down to six as the Wildcats adapt to a shorter season.

All opponents must be in PRCC’s division, which means the teams PRCC will play were already on the original calendar.

There won’t be any surprises on the schedule for PRCC, so Smith said the schedule changes caused by the delay weren’t all that impactful.

“It’s six teams that were already on the schedule, so nothing has changed. We’ll just prepare like we would have done anyway. You hate that you’re limited to six games, but it’s six games you’re already prepared for,” Smith said.

The plan is subject to change as the situation regarding COVID-19 remains fluid and changes on a daily basis.

However, Smith is hoping there aren’t any more changes made and his program can start preparing for what is shaping up to be a unique season of college football.

“So much has changed since (COVID-19) hit that all we’re doing now is hoping this stays the same. The schedule has changed three or four times, and we’re hoping now it’s a concrete plan we can stick with,” Smith said.

The Mississippi Association of Community Colleges has decided to delay the start of the football season to Oct. 1. The... read more