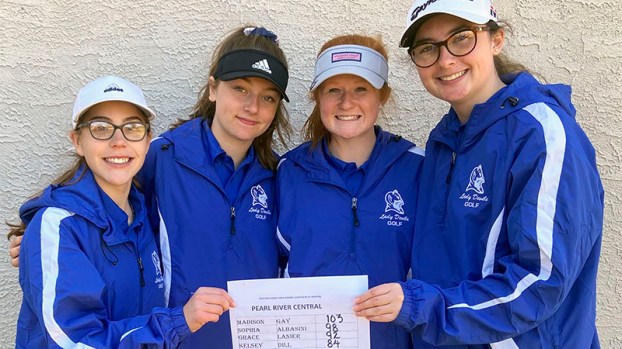 As A Team: The Pearl River Central girls golf team has athletes that are making sure to stay on top of their game this summer.

Pearl River Central’s girls golf athletes have been practicing and taking part in tournaments this summer, even during the ongoing pandemic.

Both athletes played well, but Lanier outperformed the rest of the competition and was named Ladies Club Champion.

Head Coach Shelly Dill said she’s been thrilled with the performances from her athletes during these summer tournaments.

Dill’s daughter Kelsey, who was a player on the team last year before graduating, said she was happy her teammates have been doing so well on the course.

“I have to give a shout out to Grace and Sophia for playing in the Millbrook championship and other tournaments. I’m very proud of them. (This group isn’t) just a team, it’s a family. I see things differently. I see it as my kids succeeding,” Dill said.

Dill said a big part in the athletes’ growth as players and success in tournaments comes down to their work ethic.

Golf is a game of repetition, and if athletes go an extended period without practicing then their sharpness on the course can wane. “They have put in a lot of practice and work consistently, so I am ecstatic about that. I love to see them in tournaments and my girls are rocking it out. That’s what I love to see. I want to see them getting better,” Dill said.

The constant practice and high level of performance has Dill excited about the upcoming season.

While it’s still unknown what high school sports will look like in the fall and winter, Dill is hopeful golf won’t be cancelled due to the sport being played outside and involving no contact.

Seeing how her players have been performing over the summer just means a high bar has been set for this year’s goals.

“I see us being able to go into the next school year being competitive and hopefully being able to achieve our goal of winning state. The thing is those two girls have the drive and want to be able to do it. That makes a world of difference,” Dill said.

Kelsey Dill has continued playing in tournaments and spending time on the golf course this summer as she prepares for... read more