Players knocking off the rust in the Deep South Collegiate League 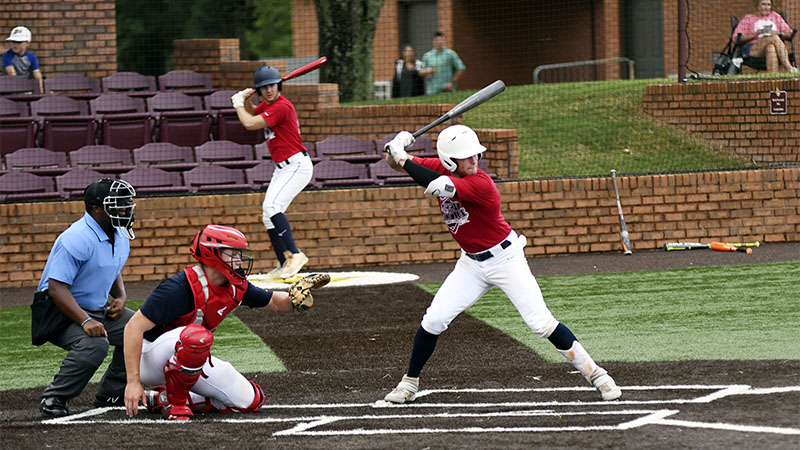 Focused In: Blaise Breerwood steps up to the plate and prepares to swing during a Deep South Collegiate League game. Photo by Jonathan Mitchell.

The DSCL had four games Wednesday as the competition has heated up with the playoffs taking place in three weeks.

The first game of the day saw Team Caver win convincingly against Team Bartlett with a 7-2 victory.

Canaan Ray, who played for the Poplarville Hornets two years ago before moving on to Mississippi Gulf Coast Community College, went 2-2 at the plate with an RBI.

The second game between the two teams got rained out after only three innings, but the final was in favor of Team Caver as well with the score being 3-0.  The two wins further secured Team Caver’s grip on first place with a record of 8-1-1.

The first game saw Team Floyd earn a tough 6-5 win that helped them maintain their position above Team Larson in the standings.

The second game of the doubleheader ended in a tie with a final score of 4-4.

The result pushed both teams above Team Crim in the standings as teams begin their playoff push with only two weeks left of regular season play. Walker Watts is the head coach of Team Floyd and he said the league has proven to be rather competitive.

Players from all levels of baseball are playing with and against each other in this league, which leads to a heightened level of competition as the athletes look to prove themselves.

“It’s been very competitive, especially for some of the (junior college) players that are getting to see D1 arms and face D1 hitters. Competition only makes you better in my opinion, and I think a lot of them are enjoying that competition,” Watts said.

Watts said it was obvious at the beginning of the season who had been staying active and who had been sitting at home twiddling their thumbs during quarantine, but over the course of the first couple of weeks the players have been able to knock off some of the rust.

Now the emphasis is on continued improvement so the athletes are prepared when they head back to their normal teams in the fall.

“Be where you want to be, set your goals and be there by the end of the summer. (That way) when the summer is over with, and you go into fall practice you hit the ground running because you’ve been playing all summer,” Watts said.