Players getting stronger mentally and physically in the SECL 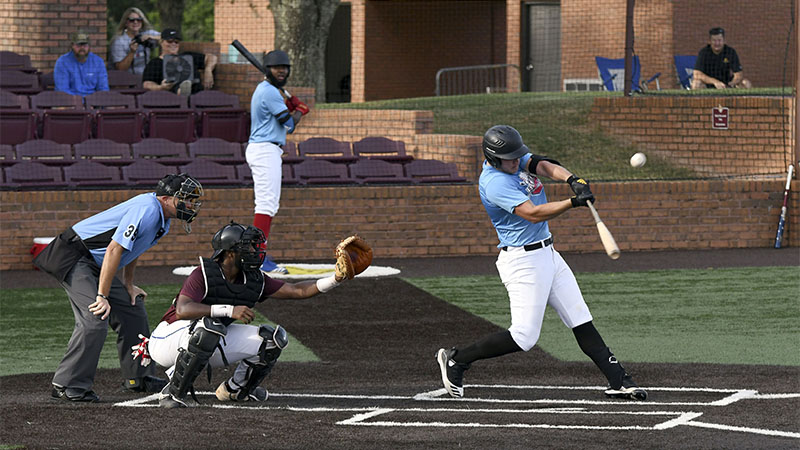 Big Hitter: Austen Izzio belts a line drive hit after a pitch came down the middle of the plate during a Southeast Collegiate League game. Photo by Jonathan Mitchell.

The Royals faced off against the Red Sox in a nine-inning game Thursday evening as part of the Southeast Collegiate League.

The game was close until the final inning when the Red Sox were able to pull away for the 6-3 win.

It didn’t take long for the scoring to start as the Royals put a run on the board in the bottom of the first inning.

The Red Sox quickly responded with a run of their own in the top of the third to even up the score 1-1.

The fourth inning passed without any scoring, but in the fifth inning both teams put another run on the board as the score changed to 2-2 with only four innings in the game remaining.

For the first time since the first inning the Royals took the lead in the bottom of the seventh after scoring a run, but again the Red Sox responded with a run of their own in the top of the eighth.

Then, to pull away and secure the win, the Red Sox scored three runs in the top of the ninth and the Royals couldn’t respond.

Dunhurst and Izzio did what they could to help the Royals, but neither player could get much going at the plate.

Dunhurst ended up going 1-4 with one RBI, while Izzio ended the game 0-3 with a walk and a strikeout.

Bob Dunhurst is the coach of the Royals and said even though his team lost against the Red Sox, over recent weeks they’ve done a better job of being competitive at the plate.

“They’re putting together better at bats, and just watching the game, seeing what they’re going to throw. I think the coaches and players (started) doing better once we knew what each kid could do,” Bob Dunhurst said.

The league has allowed athletes to work on their approach at the plate and their mental toughness.

Bob Dunuhrst said if a player is part of the SECL, it’s because they have the talent.

However, leagues like the SECL can show a player where their weaknesses lie mentally, which they can then improve before heading back to their respective programs in the fall.

“With these kids the talent is there, it’s just talking about the mindset. Most of the stuff we’re doing is trying to lock them in mentally,” Bob Dunhurst said.