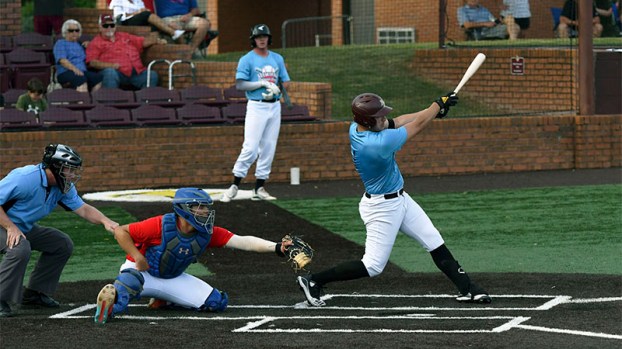 Moonshot: Austen Izzio takes a swing at a pitch during a recent Southeast Collegiate League game. Photo by Jonathan Mitchell.

Players are knocking off the rust in the SECL

The Southeast Collegiate League put on a doubleheader Monday evening at Pearl River Community College between the Royals and Mustangs.

The first game was a low scoring affair that saw the two sides tie 2-2. Former Pearl River Central Blue Devil Hayden Dunhurst scored the first run of the game in the bottom of the first inning for the Royals.

However, after that the bats went silent as both teams’ pitchers and defense kept any more runs off the board.

Then in the top of the fourth inning the Mustangs put two runs on the board to take a 2-1 lead.

A quick response by the Royals in the bottom of the inning tied the game at two runs apiece, and neither team could find a way to score another run before the game ended.

Dunhurst ended up earning two walks while splitting time at catcher and second base defensively.

Former PRC teammate Austen Izzio went 0-1 for at the plate with a walk.

The second game of the evening was a much better offensive performance for the Royals as they won handily 8-1.

The Royals ended up scoring two runs in the first, second, fourth and sixth innings to earn the win.

Dunhurst was once again active offensively for the Royals as he went 1-2 with one walk, a strikeout and two runs scored.

Izzio went 0-1 with a walk as the Royals have started building some steam towards the later portion of the season.

The team has two wins and a tie in its last three games.

Head Coach Bob Dunhurst said the better performances have come as players have gotten back into the flow of things.

There was some rust at the beginning of the season, but now athletes are starting to work on specific aspects of their game as they get back into shape.

“The pitchers with secondary pitches are getting a feel for them. They’re staying on that secondary pitch and continuing to develop it right now. Baseball is a game of repetition it’s something you have to keep repeating from your swing to throwing to defensive actions,” Bob Dunhurst said.

There are only a couple more games left in the season for the team as the summer begins to wind down.

Still, the emphasis is to continue improving so when players return to their programs in the fall they’re ready to go.

“I just want to have each kid as good as they can be going into fall practice for their team,” Bob Dunhurst said.

Golfers within Pearl River County have been staying busy during the pandemic and the constant practice paid off as Grace... read more