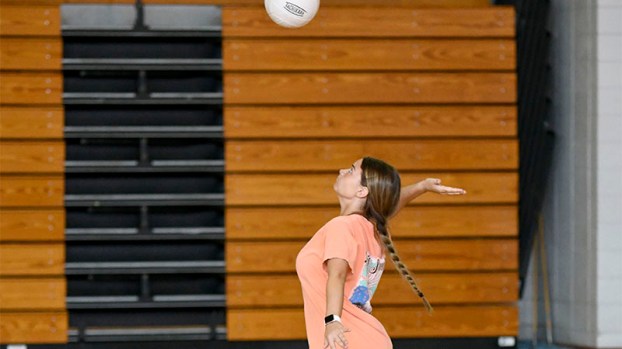 Up To Serve: Junior Alexis Hansen goes to serve during a team scrimmage. The volleyballs were disinfected after each use. Photo by Jonathan Mitchell.

The Picayune Lady Maroon Tide volleyball team hosted its second tryout Monday morning after having hosted the first tryout the week before.

The reason for the dual set up was so that athletes who were unable to make the first tryout would still have an opportunity to make the team.

Head Coach Courtney Dickens said approximately 50 athletes participated in the tryouts, which was significantly lower than in the years past.

However, being out of school meant Dickens wasn’t able to generate the normal amount of interest for the program as she had previously, on top of the fact that the country is in the midst of a pandemic.

“I thought we had good numbers compared to what’s going on right now. I wasn’t even looking for that many to even come out,” Dickens said.

This will be the third year since the program’s inception and Dickens said at this point the returning players understand the game of volleyball.

In the past the practices and tryouts were more about finding athletes and teaching them the basics of the sport.

However, now that returning players have that foundation Dickens can focus more on finding younger talent and developing it over the years.

“The girls have been on the team for two seasons, they know for the most part what they’re doing and how to play. If (a new athlete) makes the team in seventh or eighth grade, then by the time they’re a junior they’re ready to play,” Dickens said.

A big part of the tryout was having the athletes show their serve and serve receive abilities.

Those are two fundamental aspects of the game, and being proficient at one, or both, Dickens said would show an athlete’s potential.

Because of COVID-19 guidelines Dickens had the athletes split into multiple groups and they weren’t allowed to intermingle during the practice.

Balls were wiped down after each use and the athletes took part in a modified scrimmage with four athletes on each side instead of the normal six to allow for social distancing.

Now that the team is set, practices will begin, but this year Dickens said there will be more of an emphasis on conditioning and weight training. There were times last year when the team would go to five sets in a game, and Dickens said during those games she could see how fatigued her players were by the end.

To combat that, the summer plan will see the athletes lift more and work on staying in shape after having months off in quarantine.

The Deep South Collegiate League continued giving college baseball players a chance to get back on the field during two... read more