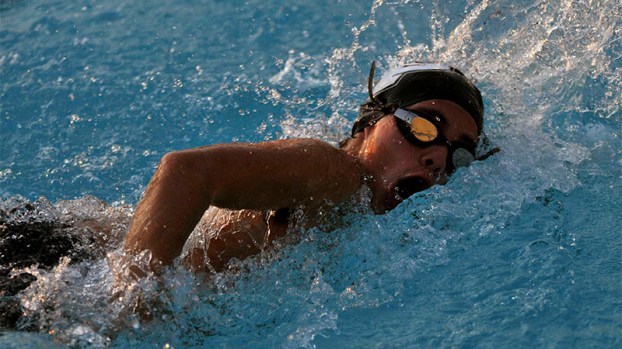 The Picayune Blue Tide swim team would normally be taking part in weekly meets as part of the St. Tammany Swim League, but because of COVID-19 the group of athletes is restricted to training sessions.

Seeing as the high schools’ mascots are the Blue Devils and Maroon Tide, the names were combined to create the Blue Tide team name.

Hutchinson said there are several health guidelines in place to make sure the swimmers are able to practice safely.

Practices take place at the Millbrook Golf & Country Club pool, which has the pool in an enclosed area surrounded by fencing.

To limit the risk, parents are required to stay outside the fence for practices.

Additional measures include having multiple practices each day to spread out the 70 swimmers in the league, while also splitting the athletes into multiple lanes so they can observe social distancing rules.

Practices started the second week of June and will go through July 10, which will give athletes a month of training before the start of the school year.

Hutchinson said the practices serve as a decent way for athletes to stay in shape, but that the main purpose is to correct their form.

High school swimmers may swim up to 3,000 yards in a single practice. After that much swimming, attrition can affect an athlete’s technique.

“That’s so much distance that you won’t keep good form once you get tired. Instead of working on speed we’re working on getting the technical part down,” Hutchinson said.

Hutchinson said in high school a big part of the practices is getting the athletes ready for meets, which means a lot of intense conditioning workouts.

However, for the Blue Tide, the training sessions are more relaxed and more focused individual instruction.

“The high schools have to get you in shape, so they pound you. Here you’re not getting pounded you’re just swimming. We just watch you and correct (the form),” Hutchinson said.

While the lack of competition this summer could be seen as a detriment, Hutchinson said the lack of meets has been beneficial for his swimmers.

Usually there would be the constant stress of getting the athletes prepared for a competitive environment, but because of COVID-19 and the cancellation of competition, the athletes have been able to just focus on themselves.

“This is the best my kids have looked since I’ve been coaching. Instead of pushing them to race we’ve been able to get them to swim like they should,” Hutchinson said.