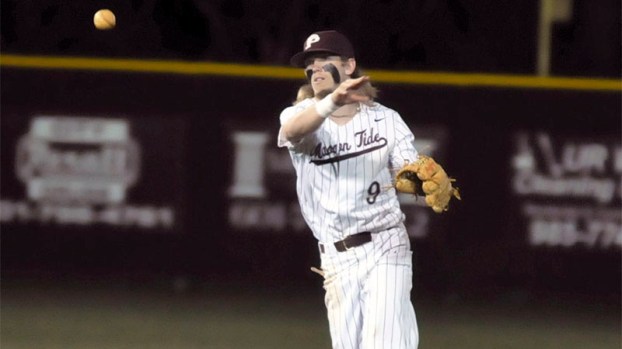 Returning Starter: Austin Samples will be one of the few players from last year's team that will be coming back for another season of Picayune Maroon Tide baseball. Photo by Jonathan Mitchell.

The Picayune Maroon Tide baseball team wrapped up its last series of workouts and scrimmages last week with the athletes having the rest of July off to relax.

The team was able to resume practices June 1 and Head Coach Evan Nichelson made sure his players were ready to work this summer as the program’s leaders tried to make up for the season it lost because of COVID-19.

Players who would’ve seen some game action last season missed out on a significant amount of experience when the season was cancelled after only 12 games.

With 11 incoming freshman part of the squad, Nichelson said the summer sessions were helpful when it came to the development of young talent.

“They’ve showed up every single day we’ve had scrimmages and come in ready to go. I think it was very beneficial to have those guys this summer to fall in with guys who were on the team and get them acclimated to one another,” Nichelson said. The young players are expected to play a big role this upcoming season for the Maroon Tide, so getting them time on the field to compete against experienced athletes from last year’s team could pay dividends later on.

Scrimmages were able to be stopped mid game in order to correct any issues, and it was important to be efficient this summer because the players will split up when school resumes.

Nichelson said 19 of his players are part of the football team, meaning he won’t get any time to work with them until the football season has ended later this fall.

That placed the onus on Nichelson and his staff to get as much done during the month of June because there won’t be any more opportunities for instruction during the upcoming months.

There are still some things that need to be cleaned up, but Nichelson said it was good to get some work in over the summer to try and get ahead.

“There’s a lot we need to brush up on. The pitchers getting more experience will come with time. There’s some mechanical things hitting wise we’ll brush up in the fall, but it’ll all come in time with the younger guys,” Nichelson said.

Now the athletes will have some time to rest and recuperate before the start of the school year.

However, that doesn’t mean it’ll be a boring finish to the summer for the players.

Nichelson said the cost is $65 a person and proceeds will go to the program to help offset the financial losses incurred from missing out on the majority of the season’s ticket and concession sales.