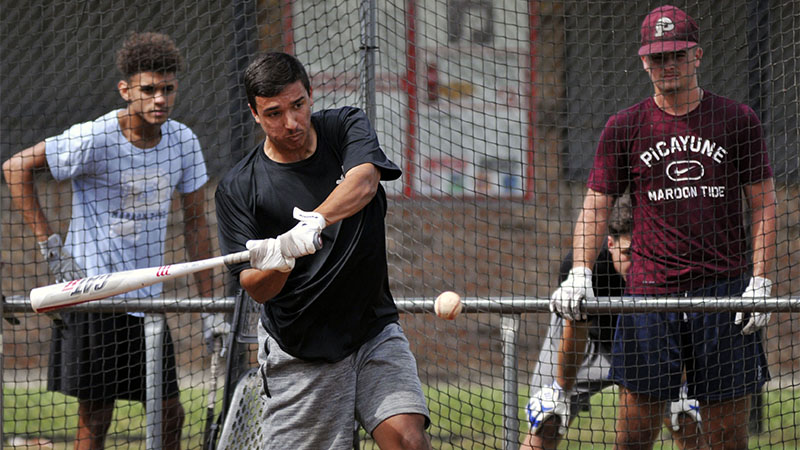 At The Plate: Logan Ledet takes a swing at a ball during batting practice. Ledet was one of the players who graduated following the season, and his production will have to be replaced. Photo by Jonathan Mitchell.

The team has 11 incoming freshman after graduating several members of last season’s team, so the scrimmages have been helpful in getting the new players into game like situations.

Seeing as a significant portion of the team isn’t experienced, Head Coach Evan Nichelson said he’s been having the athletes work on staying positive during the competitions.

“We’ve been working on not showing bad body language and being able to bounce back from one pitch to the next. We’ve been harping on those types of those things,” Nichelson said.

The scrimmage environment allows Nichelson to stop the game whenever he wants in order to coach a player or correct a mistake.

This has been useful as he educates the players on proper positioning for overthrows, and where to throw the ball in certain runners on base situations.

“With things like that it’s been beneficial to stop the game, coach it up real quick and get back to playing. When it’s fresh on the kid’s mind I believe it’ll take a little more,” Nichelson said.

The scrimmages also serve as extra time incoming freshmen can spend with fellow teammates and coaches.

Relationships are being built, and the new players are learning what it takes to be a Maroon Tide varsity baseball player.

Nichelson said the extra time in competitive situations has led to a better understanding from the players on how to properly play baseball.

The plan is for the team to host another scrimmage on Thursday and next Monday before then having the rest of July off.

Progress has been steady for the athletes, and Nichelson said from what he’s seen on the field it looks like the young guys could be key contributors this upcoming season.

“You can’t really, exactly simulate a varsity baseball game, but I have seen a difference from the first day (of scrimmages) to Monday just in their attitudes and you can tell they’re buying in. I think some of the young guys can help us. They have the skills there,” Nichelson said.