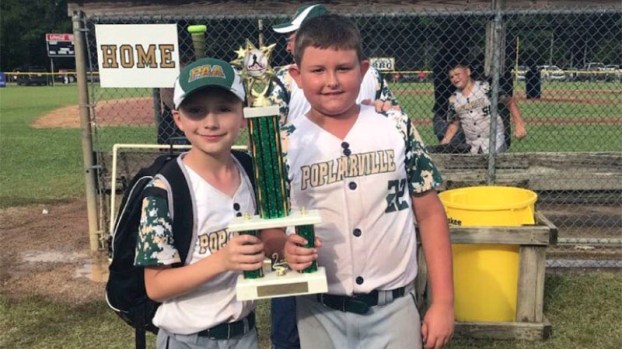 No Postseason: Unlike in seasons previously, there will be no end of season tournament this year for the baseball and softball teams.

The Poplarville Athletic Association has been able to give its baseball and softball athletes a chance to play again after being shut down due to the COVID-19 pandemic.

Games restarted June 1 with teams playing once a week after having to delay the seasons.

Softball competition ended this week, but the baseball season will continue until July 24.

The restart involved implementation of several guidelines that had to be followed by players and parents. PAA Secretary Martin Walker said getting people to adhere to the rules wasn’t a problem.

There were no pre-game or post-game handshakes allowed, parents were required to practice social distancing while watching the game and the concession stand was closed along with the public restrooms.

Only recently were several portable toilets brought in for patrons and Walker said they’re serviced regularly.

“The only complaints we had, that were minimal, were having the bathrooms closed. Other than that we haven’t had complaints about the rest of it,” Walker said.

Walker said there were a number of athletes who didn’t return after the restart, so several teams were combined so they had the necessary number of players to compete.

For the most part it seemed like the athletes and parents were excited to get back on the field, which is why the league decided to go ahead with the restart.

“We had some that were ready to go. The first time I texted them if they were still willing to play they were like let’s go out tomorrow and play. We had a good chunk optimistic about opening up,” Walker said. Normally there would be an end of season tournament to determine champions, but with COVID-19 cases rising and the situation still fluid regarding restrictions, Walker said there won’t be a postseason this year.

Instead the teams will finish up their seasons before planning begins for next year’s opening day.

“Normally we would have an end of season tournament to put everybody together and see who came out on top, but we had a board meeting two weeks ago and decided to not do a tournament. We’ll just play the season out and then pick it back up next year,” Walker said.

Walker said sports are a great avenue for children to get outside and stay active, which is one of the benefits of the PAA seasons restarting.

“Definitely some of those kids need an outlet by getting outside and playing around. The important aspect was to get back out there to be around friends, make new friendships and get the fundamentals of baseball back in their head,” Walker said.