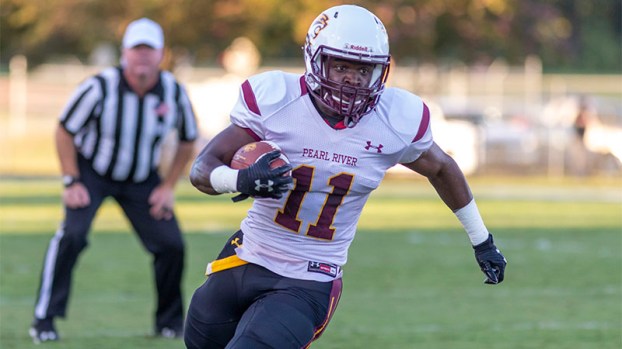 Bounce It Outside: Running back Lance Stewart finds the edge during a PRCC football game last season. Submitted photo.

The Mississippi Association of Community Colleges has decided to delay the start of the football season to Oct. 1.

The MACC abstained from a vote by the National Junior College Athletic Association on July 13 that would move all fall sports competitions to the spring.

At the time, the MACC said it wanted more time to evaluate the situation regarding COVID-19 and the organization’s ability to have fall sports.

Now the decision has been made that the football season will start Oct. 1 and will consist of six games with divisional opponents followed by a playoff.

MACC Commissioner Steven Martin said the decision to keep the football season in the fall was mostly due to recruiting.

Martin said football programs at four year universities do the majority of their recruiting in the fall, and so if the football season was moved to the spring then the athletes would possibly miss out on opportunities to play at the next level.

There was also a limit on how far the season could be pushed back with most colleges ending the fall semester around Thanksgiving, which is how the current start date was chosen.

“None of this is a certainty, but we were thinking the further we could push (the season) back in the fall that it may give the opportunity for some of the issues with COVID-19 to be resolved,” Martin said.

However, the rest of the fall sports have been pushed back to the spring because it was decided that recruiting wouldn’t be as heavily affected for the other sports like volleyball and soccer.

Meanwhile the men’s and women’s cross country championships will continue on with their original dates along with Division III women’s tennis.

Martin said the MACC has been in close contact with the NJCAA during this process to try and come up with the best possible plan for a fall football season.

“We’re not just a lone conference out here just doing what we want do. We’re working closely with NJCAA and taking direction from them, and they have some creative options for our fall season,” Martin said.

Martin said the hope is that within the next 10 days a more concrete schedule will be provided to the MACC’s football programs regarding health guidelines, when practices can start, etc.

NJCAA President and CEO Dr. Christopher Parker said the two organizations have been in contact to make sure the proper procedures are in place to limit the spread of COVID-19. “We’ve given them all the health recommendations from national office. They will abide by all health guidelines from the local and state government since they’re playing outside the national championship purview,” Parker said.

While it’s clear the decision to delay the season isn’t set in stone, and is entirely dependent on how bad the spread of the COVID-19 gets, Martin said that at the end of the day the most important aspect of the fall football plan is to ensure the safety of all athletes.

“Our number one concern is health and safety. If those issues don’t permit us to play Oct. 1 we won’t play Oct. 1. It’s something we evaluate on a daily basis,” Martin said.

Picayune tennis getting some work in over the summer