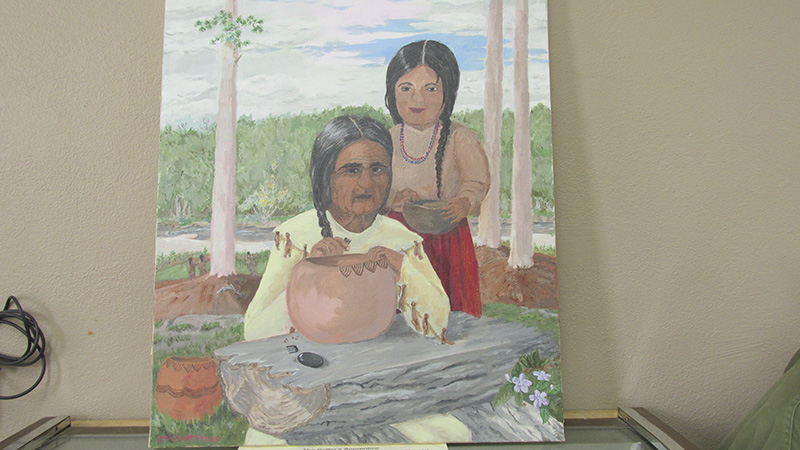 Photo by Laurel Thrailkill; This painting depicting the three stages of pottery production was painted by Jean Stockstill Heartfield and donated to the PRCHS museum in City Hall.

The Acolapissa tribe was not the only Native American tribe to make its home in south Mississippi. This area was also once populated by members of the Choctaw tribe.

“The Choctaws were the heirs of the mound-building Mississippian cultures of the Southeast,” Jean Stockstill Hartfield wrote in an article published in The Historical Reporter, a publication of the Pearl River County Historical Society.

The late Jean Stockstill Hartfield was a native of Pearl River County and often spoke of her Native American heritage.

Hartfield was also the president of the Mississippi Archaeological Association from 1990 until 1991.

In the article titled The Choctaw of the Coastal Mississippi Counties, Hartfield wrote, “Pottery during the Mississippi Period was tempered with burnt shell.”

“From the high rise bridge on U.S. I-10, look at the tangle of small streams and expansive marshes,” Hartfield wrote. “One can easily imagine a native in a pirogue moving slowly through that ecosystem, perhaps spearing fish, gathering bivalves or trying to kill a white-tailed deer.”

The pamphlet states that Pearl River County was rich in native species that could be used for food and shelter by Native Americans who once populated the area.

Stough said the history of the Choctaws in Pearl River County began around the late 1700s or early 1800s.

“They were a matriarchal society,” Stough said.

“[The tribe leader] organized a group of Choctaw warriors including some from Pearl River County area who joined with Gen. Jackson at the Battle of New Orleans,” Stough said.

Stough said the Choctaws were skilled warriors who often caught the British soldiers by surprise.

“They were devastating to the British,” Stough said.

The Native American history of Pearl River County has been carefully documented by members of PRCHS, including Hartfield.

“We are fortunate in having written accounts of the last remnants of our once proud and independent people who were here when the first European incursion occurred,” the pamphlet states. “The late authors, Laura Evans and S.G. Thigpen recorded the memories of our elders who witnessed the gatherings at our first County Seat: Center, or as it is now known, Caesar.”