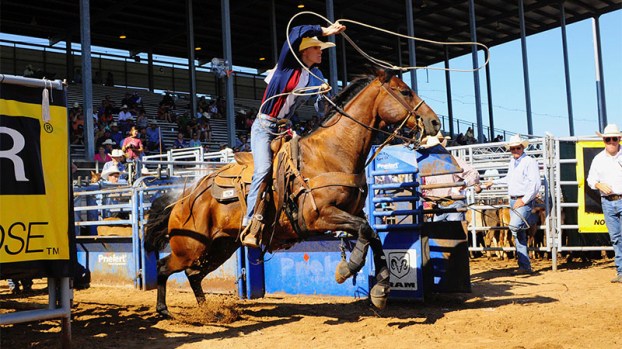 Hard Competition: Team roping involves a pair of riders that have to rope and tie a steer in the least amount of time possible.

The team ropers were the defending national champions having defeated everyone in their way last year.

Davis and Graves were looking to repeat that success this year as national champions, but instead just missed out on qualifying for nationals.

There were 24 other teams competing for just four spots, and the athletes from Poplarville came in seventh place.

The tournament took place in Purvis, Mississippi, instead of in Hattiesburg where it’s been hosted in the past.

The event had to be moved and rescheduled because of the COVID-19 pandemic, so Graves and Davis adjusted their training regimens accordingly.

Graves said even though it stung to have worked for so long and not move on to nationals, because of his past experiences as a national champion, the result didn’t severely affect him.

“I just realized that I’ve been blessed enough to do (well) where a lot of people haven’t, so I didn’t let that get to me,” Graves said.

Each team has three rounds to tie a steer as quickly as possible with judges then averaging out the three times.

The four fastest times then get to advance to nationals.

Graves and Davis are competing in the same sport their fathers competed in as a team roping duo decades ago.

The family legacy has continued and Graves said roping in general has provided him with a purpose to keep working and continue growing as a competitor.

“It means a lot to me. I love everything about it. It gives me a lot to just be there,” Graves said.

Now the focus will shift for Graves as he looks to continue competing. There are several “jackpots”, amateur rodeos and even some professional rodeos the Poplarville native is looking to compete in.

Graves said that taking part in rodeos and winning them is how he makes money, so he’s planning on continuing to compete even with COVID-19 forcing events to be rescheduled and relocated.

“This is what I do for money. If I don’t rodeo and don’t win I don’t have any money, so I have to go and hustle to make some,” Graves said.

The future is one of numerous possibilities for Graves as he surveys his options.

He’ll be attending Pearl River Community College as a rodeo athlete for the Wildcats, but after that the plan is unknown. The only certainty is that team roping will continue to be an integral part of Graves’ life.

“I would like to go into pro rodeo and win the world like my dad did. Just get as good as I can and see if I can make a living out of it,” Graves said.