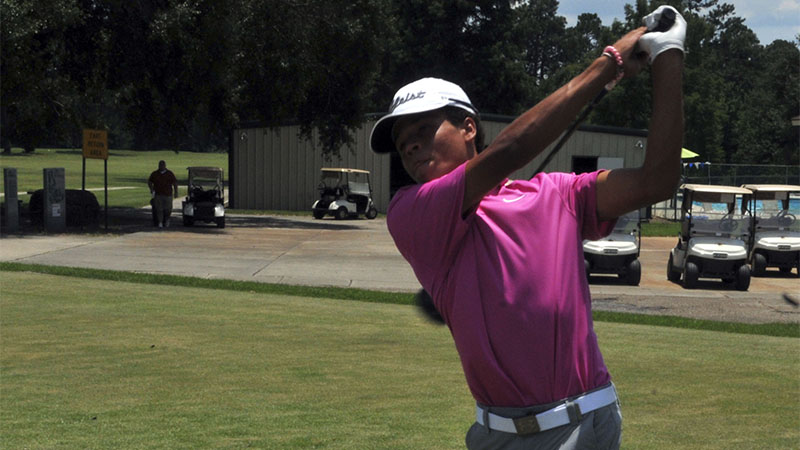 On The Range: Cam Guidry watches his ball after hitting it while on Millbrook's driving range.

Golfers within Pearl River County have been staying busy during the pandemic and the constant practice paid off as Grace Lanier and Cam Guidry won the Millbrook Ladies Championship and Millbrook Club Championship.

The Club Championship saw both local and out of town golfers compete over the July 4 weekend.

Lanier and Guidry have been active leading up to the championship, with each golfer participating in numerous tournaments prior to the competition at Millbrook.

Both golfers said they’ve not only been taking part in tournaments, but have also been practicing six days a week to prepare for competitive environments.

Lanier said because of the way the school year ended it made sense to spend more time on the golf course.

“Because of the stuff going on and school ending early I figured I might as well start doing it, get better at it and keep pushing,” Lanier said.

Prior to the championship Guidry said he’d had a very focused approach.

Because tournaments take place in all types of environments and with a variety of courses, it’s important a golfer’s skills can easily translate from one competition to the next.

Both athletes have used the circumstances surrounding the COVID-19 pandemic to work on their game.

Instead of focusing on the negatives, the athletes have done their best to find the positives in the situation.

“Nothing has changed my summer practice…It actually helped me because my summer was extended by months, so it gave me a lot more time to get my game ready for tournaments,” Guidry said.

Both athletes plan on competing in several more tournaments before school starts back up again.

For Lanier, it’s all about getting comfortable in competitive tournament situations, and the only way to do that is to continue competing.

“It calms my nerves when I’m doing more tournaments because I usually get nervous before a tournament, but it relaxes my nerves by doing more of them and getting more used to it,” Lanier said.