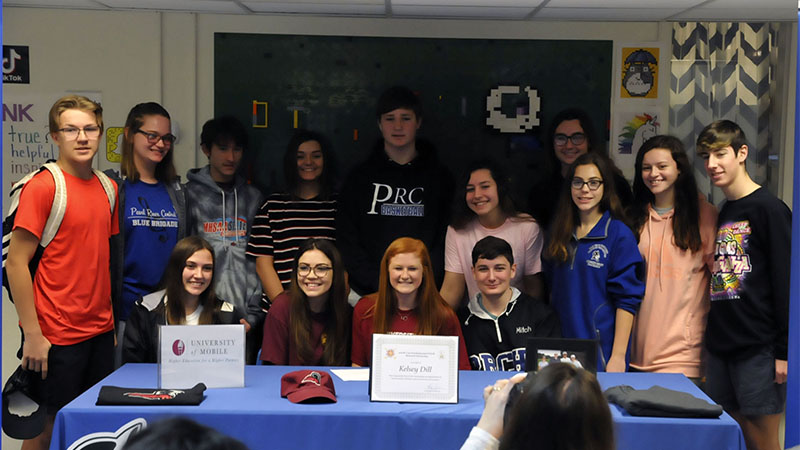 On The Course: now that Kelsey Dill has signed on as a college golfer she is working to stay competitive during the summer. Photo by Jonathan Mitchell.

Kelsey Dill has continued playing in tournaments and spending time on the golf course this summer as she prepares for her first season as a golfer for the University of Mobile.

Dill’s performances last year for the Pearl River Central girls golf team earned her a scholarship to play for the Rams this upcoming season.

The COVID-19 pandemic has led to some shifts in the way tournaments are held, but for the most part it’s been business as usual for the recent high school grad.

Seeing as she’s no longer a high school student, Dill has been playing against top tier competition in preparation for her first collegiate season.

The players are better than her opponents in previous years, and there’s an expectation that she perform well because of her scholarship status.

Even though she’s been putting in countless hours of work, Dill’s time on the course hasn’t been entirely centered on herself.

Dill said she’s been a part of a mentoring program for Kelly Gibson golf tournaments where she takes a younger golfer under her wing and teaches them the finer points of the sport.

Athletes from the young age of 4 all the way up to 14 have been helped by Dill as she passes on her knowledge to the younger players.

“It has been heartwarming seeing the kids. When you’re trying to explain it to the kids, them understanding it and then doing what you ask them to do is honestly amazing. The look on their face when they hit a good shot melts my heart,” Dill said. The busy summer will continue as Dill is planning on participating in at least five or six more tournaments before she heads to Alabama.

It’s still unknown what the college environment will look like in the fall due to COVID-19, but Dill is preparing at full speed just in case.

“We are probably going to start the season normally, but we don’t actually know the specific start date for the season,” Dill said.