Eagle Scout project sets up boxes to dispose of flags 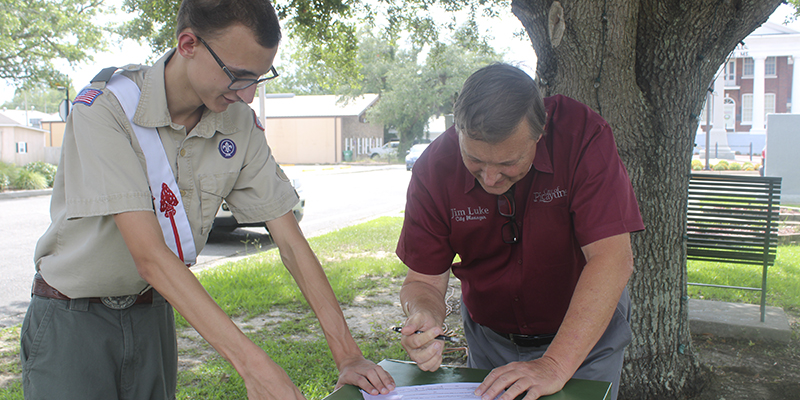 City Manager Jim Luke signs off on paperwork for Galen Watts’ Eagle Scout project. Watts worked with the city and to create flag deposit boxes so people will know where to take flags that need to be retired. Cathy Cook | Picayune Item

Picayune has three newly placed flag deposit boxes to collect flags that need to be retired due to an Eagle Scout Project from Troop 2 member Galen Watts.

Troop 2 retires flags at every Street Festival held by Picayune Main Street, but often people do not know where to take their old flags, said Watts. Flags can be dropped off in various locations, including City Hall.

The new flag deposit boxes were set up in three locations: in front of City Hall next to the flag retirement pit, at Margaret Reed Crosby Memorial Library and at the north end of Pittman Family Life Center by First United Methodist Church in Picayune.

To create flag deposit boxes, Watts received donations of old newspaper dispensing boxes from The Advocate, donated paint from Pro Color and stickers donated by AEF. Watts’ troop helped him refurbish the boxes, paint them green and apply the stickers labeling them as flag deposit boxes. The project took 104 hours to complete.

Watts had heard his scout masters, one of whom is his father, talk about the need for a way to collect flags that need to be retired. The troop leaders even recommended the project to several other scouts who were looking for Eagle Scout projects over the years, but no one had taken it on. Watts said he wanted to do the project because the American flag is an important symbol.

“The flag’s a symbol of our country and we wear it on our shoulders,” said Watts.

Watts also worked with the city to complete the project.

“We just are proud of the partnership that we have with Troop 2 and the Scouts,” said City Manager Jim Luke.

The troop has also partnered with the city for previous projects including the Purple Heart parking signs on Goodyear Boulevard that designate those parking spots for veterans who were injured in the line of duty.

The Scouts will be checking the boxes regularly to collect flags that need to be retired.
Watts plans to continue to help out with the Scouts over the next two years as he attends Pearl River Community College. He recommends scouting to others.

“One hundred percent do it. It’s very fun, very enjoyable,” said Watts. “You meet so many people and learn so many skills.”