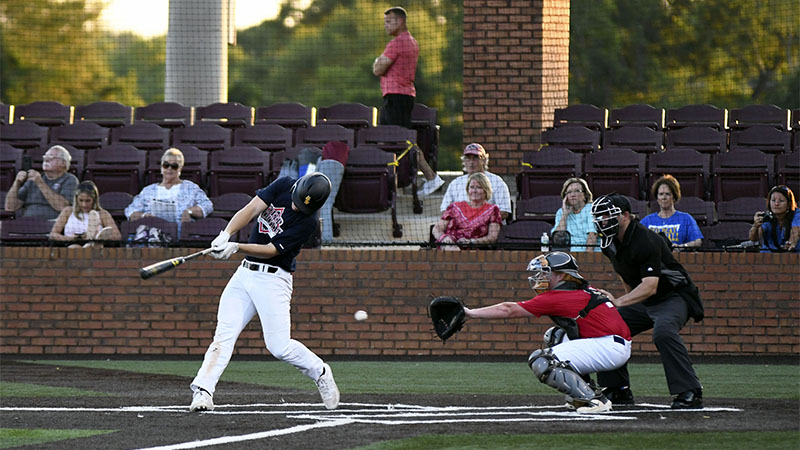 Swing And A Miss: A batter misses a pitch during a Deep South Collegiate League game. Photo by Jonathan Mitchell.

Tuesday was a busy day for the Deep South Collegiate League as there were six games that took place between Columbia High School and Pearl River Community College.

The first game of the day saw Team Floyd shut out Team Bartlett en route to a 6-0 victory. Former Poplarville Hornet Canaan Ray was one of the few offensive bright spots for Team Bartlett going 1-2 with a walk during his team’s loss.

Other than Ray, Team Bartlett struggled at the plate as Team Floyd jumped out to an early 3-0 in the first inning and never looked back.

The second match up between the two teams was a little closer, but Team Floyd earned another win with a 9-4 score.

Once again Ray was dangerous at the plate for Team Bartlett as he went 2-3 with a walk and was one of the four runners to score for his team.

Ray showed his aggressiveness on base paths with a stolen base as well.

The two wins on the day gave Team Floyd an overall record of 4-6-2, while Team Bartlett dropped to 5-7 on the season.

The first match up was a 7-3 victory for Team Caver, and former Poplarville Hornet Blaise Breerwood struggled at the plate for Team Larson going 0-2 with two strikeouts.

Team Larson as a whole had a hard time getting anything going offensively, only recording three hits the entire game.

The two teams were tied 2-2 after the first inning, with Team Larson taking a brief lead after scoring a run in the bottom of the fourth.

However, in the top of the sixth inning Team Caver exploded for five runs and Team Larson couldn’t respond.

Former Pearl River County athletes Brady Tynes, Kade Turnage and Luke Smith are all on Team Parker, but the team struggled offensively and defensively as Team McCarty handily won the first match up between the two teams 11-1. The two teams are currently vying for the third place spot in the league, and the win moved Team McCarty to 7-3-1 on the season while Team Parker dropped to 5-6-1.

The second game of the doubleheader between the two teams saw Team Caver rout Team Larson 13-0.

Team Caver scored 11 runs in the first inning to take a commanding lead and never relinquished its hold on its way to another victory. Now 9-1-1 on the season, Team Caver is leading the pack with Team Garner in second place at 8-5-1.

University of Southern Alabama pitcher Miles Smith threw a no hitter for Team McCarty as they held on to the one run win.

Kirk McCarty said his team has slowly been working itself back into shape following quarantine.

Coaching in the DSCL means McCarty has spent time with a variety of athletes from different levels of baseball, and he hopes by the time the season is over he’s had a positive impact on all of his players.

“I hope the biggest thing they can take away from having me as a coach is a good balance between being relaxed, having fun and playing the game of baseball, but still going out there to play well and get better,” McCarty said.