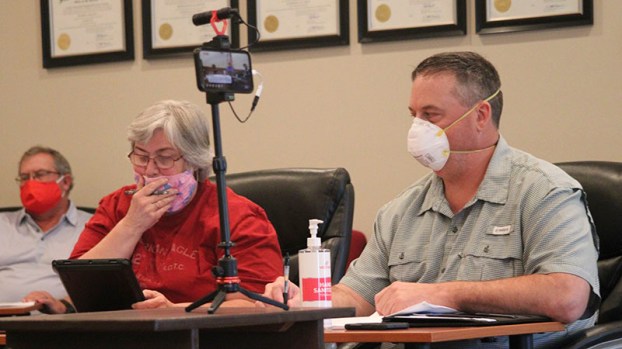 COST CONCERNS: Aldermen members Shirley Wiltshire and Russell Miller listen on while matters are discussed during Tuesday’s Poplarville Board of Aldermen meeting. Photo by Cathy Cook

Poplarville’s Board of Aldermen approved holding a special election to vote on Mississippi Power Company’s franchise fee on Tuesday, August 4.
The voters will be able to vote on whether they approve or disapprove of the ordinance that the Board passed granting Mississippi Power a non-exclusive electric franchise, which entails the power company paying a percentage of its proceeds to the city. Mississippi Power will pay for the cost of the election.
The Board also approved hiring Linda DuPont as a part time deputy clerk to assist with the special election.
In a separate matter, the Board approved a payment of $159,975 to Warren and Warren Asphalt Paving for surface maintenance work associated with the 2019 Road and Bridge Bond Program.
The Board also accepted the lowest bid for improvements near Cumberland and Main Street as part of the 2019 Road and Bridge Bond Program improvements. The lowest bid was from CEI Concrete Services for $23,312.
In a separate matter, Board members had some hesitation passing the claims docket at their regular meeting Tuesday, although after discussion the claims docket was approved in a four to one vote. Board member Kevin Tillman voted against the motion.
Initially Board members Shirley Wiltshire, Tillman and Anne Smith did not want to approve the claims docket because they were concerned about the purchase of a fire truck. The board approved purchasing the fire truck for $26,000 at a special called meeting last week in a two to one vote.
Board members Smith and Tillman had been unable to attend the special called meeting.
Tillman said he was concerned about purchasing a pumper truck, when the fire department’s ladder truck consistently needs repairs. Tillman was also concerned that at such a reduced price, the truck might have issues. Wiltshire was also concerned about where the funding for the fire truck would come from.
City Clerk Jane O’Neal told the Board that the budget would have to be amended and if revenue was short by September, then the funding for the purchase would have to come from the city’s cash reserves.
Tillman made a motion to pass the claims docket except for the fire truck purchase. City attorney Manya Bryan said she did not recommend passing the claims docket without approving the entirety of the docket. O’Neal noted that she has seen other Boards pass claims dockets with a line item removed.
Deputy Fire Chief Donald D’Antonio told the Board that the main fire engine and the ladder truck sometimes go down at the same time, so a third truck in reserve will help ensure the department is prepared to respond to medical calls.
The truck the city is purchasing is 20 years old. D’Antonio said that the truck’s age may reduce the cost of maintenance because it does not have as many electronic instruments that could need more expensive repair. D’Antonio also said that having a reserve truck should help improve the department’s rating.