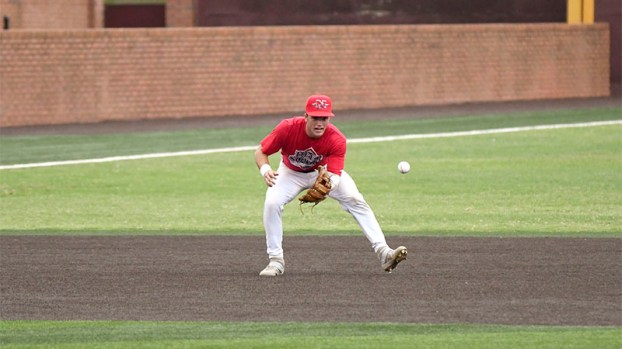 On The Hop: Blaise Breerwood goes to field a grounder during a Deep South Collegiate League game. Photo by Jonathan Mitchell.

The first game of the day saw Team Crim and Team Larson face off in a battle between the two teams at the bottom of the league.

It was a high scoring game, but Team Crim earned the victory with the final score being 13-7 as Team Crim looked to put some distance between themselves and Team Larson.

Former Poplarville Hornet Blaise Breerwood has been a solid offensive contributor for Team Larson and his patience at the plate has seen him earn numerous walks during the season. However, Team Crim’s players were in rhythm at the plate and ended up building a lead Team Larson couldn’t come back from.

Team Caver came into the week in second place and further secured a hold on that spot as the players dominated Team Garner during an 8-1 win. Team Caver scored two runs in the first and third innings, then scored four runs in the fourth inning to take an 8-0 lead.

Team Garner got a consolation run in the top of the sixth, but it wasn’t enough to overcome the eight run lead.

The second game of the doubleheader between the two teams had a similar score to the first match up as Team Caver blanked Team Garner en route to an 8-0 win.

Team Caver racked up 10 hits while scoring two runs in the second inning, one run in the fourth inning and the final five runs in the top of the fifth inning. After the two wins Team Caver’s overall record improved to 11-2-2 while Team Garner dropped to 10-7.

However, it was Team Floyd that was victorious with the final score 11-3 in favor of Team Floyd.

Team Parker is now 6-8-1 after the loss while Team Floyd is 6-7-2, meaning it’ll be a tight race between the two teams to determine final playoff spots.

Team McCarty was in third place heading into the match up and the win put some space in between them and fourth place Team Parker.

Former Poplarville Hornet Canaan Ray has been a top performer for Team Bartlett and has the second highest batting average on the team with a .400, according to the stats on the GameChanger app.

However, Ray and his teammates couldn’t get anything going at the plate as Team McCarty had a strong defensive showing to get the win.

The final game that took place Tuesday was a close game that had an unusual ending.

Team McCarty and Team Bartlett were tied as the game ended, so to decide a winner the teams had a rock, paper scissors tournament that Team Bartlett triumphed in.

Team McCarty’s final record after the day of action was 8-4-1 while Team Bartlett finished the day with a 7-9 record. Walker Watts is the head coach for Team Floyd and he said his players are enjoying the last couple of regular season games before the playoffs start.

“You can tell everyone is enjoying being back out there. It’s not as stressful as playing for a college team or a high school team. You’re not playing for anything you’re just getting back into it and getting better,” Watts said.

Watts said the summer league has provided an opportunity for athletes to get back in shape as they prepare to return to their college programs.

Depending on the facilities available, some of the athletes may have not thrown or hit at all during the months prior to the league starting, so it’s important the players get their bodies ready for the fall.

“They may be a step slower, or may get more tired more quickly than they used to. Right now it’s more about learning, teaching their body how to recover and what to do to get ready for a full game,” Watts said.

The Deep South Collegiate League held another six games Wednesday as the teams took advantage of the good weather to get some reps in.

The top two teams in the league faced off in a battle for first place that saw Team Caver come away with an 11-5 win. The win allowed Team Caver to put some space between themselves at the top of the league with a record of 12-2-2, dropping Team Garner’s overall record to 10-8.

Team McCarty and Team Bartlett are two mid table teams, which means a win held extra significance when it came to playoff seeding.

In Wednesday’s match up it was Team McCarty that came out on top with a dominant 9-2 win.

Former Poplarville Hornet Canaan Ray has been an integral part of Team Bartlett’s offensive performance this season, and has even been aggressive on the base paths with five stolen bases. However, Team McCarty’s firepower was too much for Ray and the rest of the team to handle during the loss.

Team Parker and Team Floyd faced off in a doubleheader Wednesday with the two teams neck and neck in the standings.

The first game was an 11-11 tie as both teams got going offensively.

The second game was entirely in favor of Team Parker as it shut out team Floyd en route to a 5-0 victory.

With the two teams jostling for position, the win was key for Team Parker as it moved to 7-8-2 on the season, while Team Floyd dropped to 6-8-3. That means former Pearl River County athletes Kade Turnage, Brady Tynes and Luke Smith are in prime position to compete in the playoffs next week for Team Parker.

Team Larson and Team Crim are in last place and second to last place respectively, but that doesn’t mean the athletes have nothing to play for.

The two teams took part in a doubleheader Wednesday and ended up splitting the series.

Team Larson won the first game 13-10, while Team Crim was victorious in the second match up winning 5-0.

Local swim programs are preparing for the start of an unusual fall season as the COVID-19 pandemic continues to rage... read more