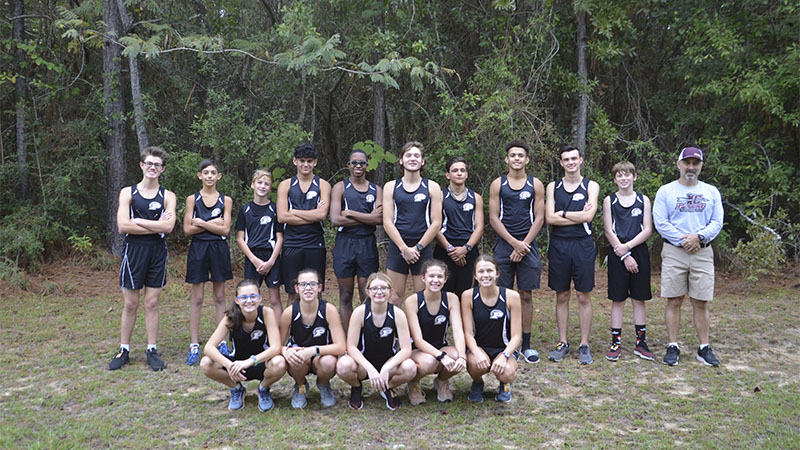 The Mississippi High School Activities Association has delayed fall sports by two weeks and local cross country programs are working to prepare for the postponed start of the season.

The Maroon Tide’s athletes have been hard at work over the summer once the MHSAA allowed summer sporting activities to resume June 1.

Head Coach Chris Wise said he’s been averaging about 10 to 12 athletes per practice, and added that their improvement has been obvious.

“The kids are coming consistently and working hard. We’re in better shape than we’ve ever been at this point,” Wise said.

Prior to COVID-19 shutting down the sports world, Wise had been hoping to include some weight lifting into his athletes’ training regimens this summer.

However, because of the complicated guidelines in place for indoor workouts and weight lifting, Wise has instead opted to keep his athletes outside and focused on conditioning.

“We’re just trying to do things we can do on our own. Pushups and sit-ups are always free. We’re trying to do lots of different types of running workouts and trying to fight ourselves back into shape,” Wise said.

Scheduling in the high school cross country world can sometimes be a last minute thing as hosting schools only notify programs of a meet maybe a month before it’s happening.

Because of this Wise said the two week delay hasn’t necessarily affected how many meets the Maroon Tide will compete in.

In fact, Wise said the late start might actually benefit the athletes.

“It’s really not going to affect us that much. It’ll just give us more time to get ready,” Wise said.

For the Blue Devils and Head Coach Mike Hindman, the summer has been all about conditioning.

Hindman said he’s had anywhere from 15 to 24 athletes showing up to the voluntary workouts, but even with such good turnout the focus has been more about easing back into the flow of things than on improving times.

“I just haven’t really pushed them like I normally would this close to the start of the season as far as times and actually really stretching the distance they’re running,” Hindman said. However, that’ll change this week now that a number of athletes have been consistently showing up to the summer workouts.

While expectations may have shifted because of the late start to the season, Hindman said there would still be plenty of athletes who get faster as the season goes on. “There’s a few of those that have been the most consistent to workouts and they’re ready to go. I think I’m going to see really good improvements in their times depending on what meets will look like,” Hindman said.

Whether or not the meets are held like last year’s, or if the starts are staggered and split into multiple heats, is still unknown.

However, as the season approaches the hope is that the MHSAA is more specific on what guidelines will need to be followed at cross country meets.

“Hopefully in the next few weeks we’ll get a sense of what meets will look like, but even if we get a feel for that it could change in a moment,” Hindman said.

Neither the boys nor girls programs at Poplarville have been meeting over the summer because neither team was able to host a tryout before COVID-19 forced schools to shut down.

Because of this, Boys Head Coach Luke Gipson said the delay would be a boon for his athletes as they return to campus.

“I think that’ll give us a needed cushion to have a tryout and get them acclimated to the heat before we throw them out there running a 5k,” Gipson said.

Gipson said the majority of his runners are also soccer players, which Gipson coaches as well.

He’s used that relationship to not only make sure the runners are conditioning at practice, but that they’re staying active at home as well.

The Girls Head Coach Beth McShea said the delay would allow her to drum up interest for her program once school restarts.

Not only that, but the late start will give McShea a chance to slowly ramp up the intensity of her athletes’ workouts since they’ve been out of school for several months. “It’ll take a bit to ease them into it, so we probably won’t run long distance until September. We probably won’t push it and just do some easier runs to get them back into shape,” McShea said.