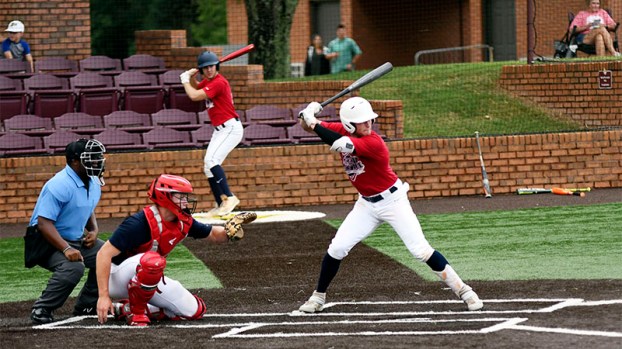 At The Plate: Blaise Breerwood stands in the batter's box as he waits for the perfect pitch to swing on. Photo by Jonathan Mitchell.

Bats are coming to life in the DSCL

The Deep South Collegiate League hosted a make up game Thursday afternoon between Team Caver and Team Parker after rain caused the game to be cancelled earlier in the week.

It was a high scoring game, but Team Parker emerged victorious with the final score of 19-10.

A fast start led to Team Parker scoring six runs in the top of the first inning, which Team Caver responded to by scoring a pair of runs in the bottom half of that inning.

The second inning ended up being the only inning in the game in which neither team scored.

Then in the third, Team Caver put two more runs on the board to cut into the lead.

However, Team Parker responded in the top of the fourth inning with a three run outburst.

Team Caver continued playing catch up by scoring once in the bottom of the inning, but Team Parker pulled away en route to scoring nine runs in the top of the fifth.

Team Caver scored four runs in the bottom of the sixth, but after both teams scored in the seventh, the game ended with Team Parker coming out on top.

Former Picayune Maroon Tide player Kade Turnage was part of the offensive machine that went to work for Team Parker.

The catcher went 1-2 at the plate with two RBIs, two walks and two runs scored for Team Parker.

Jonathan Parker said after the game his players have done a good job during the season of working on their mental toughness.

Summer leagues are all about individual improvement, and Parker said learning from failures helps players prepare mentally for their college seasons.

“When you’re doing reps in the summer you’re seeing if it works or doesn’t work, and that’s where mental state comes into play. Keep trying something you’re working on and if you know it’s the right thing to do, then you can keep the same mental state the whole time,” Parker said.