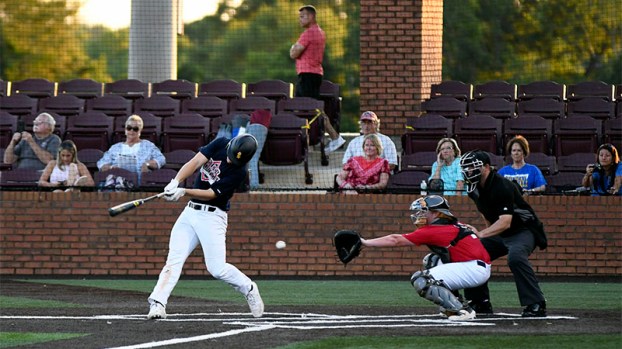 In The Heat: The Deep South Collegiate League games taking place during the summer has exposed players used to competing in the spring to 90 degree weather. Photo by Jonathan Mitchell.

The Deep South Collegiate League hosted another two games at Pearl River Community College Tuesday evening, even after a set of heavy thunderstorms hit the area.

It was still lightly drizzling when the first game between Team Larson and Team Floyd started at 5 p.m., but the rain soon backed off for the rest of the night.

Team Larson and Team Floyd competed in a close game that almost resulted in Team Floyd completing a comeback, but ended up just falling short with the final score 4-3 in favor of Team Larson.

For Team Larson, former Poplarville Hornet Blaise Breerwood went 0-2 at the plate with two walks, a run scored and a strikeout.

Breerwood’s run came in the first inning when Team Larson jumped out to a 3-0 lead.

Team Floyd continued chipping away at the lead, even scoring a run in the bottom of the seventh to make the game 4-3, but the team wasn’t able to tie up the game and send it into extra innings.

Team Bartlett had a solid game defensively while being efficient at the plate as it defeated Team Caver 6-1.

A big part of the offensive explosion for Team Bartlett was former Poplarville Hornet Canaan Ray.

Ray went 3-4 at the plate with three RBIs and a run scored.

Ray also had two stolen bases to further pad his stat line, and with the win Team Bartlett moved to 5-4 on the season.

The team will have two more games to play Wednesday as they battle for playoff positioning with the other teams in the league.

Josh Larson, head coach of Team Larson, said the weather has played a big role in how the games have been played so far.

Baseball is a spring sport, meaning for the most part the athletes are used to playing in 70-degree weather.

However, this summer ball league has led to some games being played under the scorching Mississippi sun, and Larson said that impact couldn’t be understated.

Not only does it affect players at the plate when they have to face a fresh pitcher, but it can also affect some of the defensive players as well.

“We had a catcher catch back to back games and it got pretty hot back there. We had to use one of the other team’s catchers to give him a break. When the guys get back there with all that gear on and catching multiple games, it’s tough,” Larson said.

The progress has been obvious for Team Larson as the season has wore on, and Larson said he’s hoping to see more improvement from his players these last couple of weeks.

“Hopefully we can clean the errors up and our pitchers can keep going deep into games for us,” Larson said.

Pearl River Central’s girls golf athletes have been practicing and taking part in tournaments this summer, even during the ongoing... read more