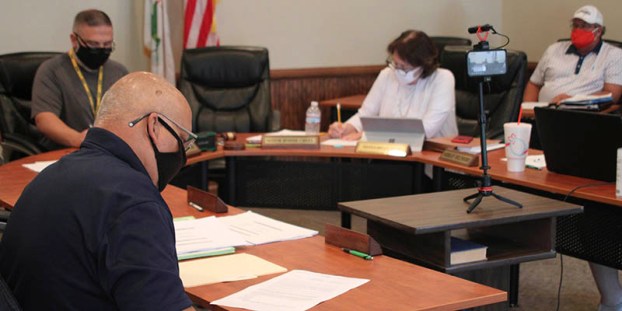 Poplarville Police Chief Danny Collier listens as the Board of Aldermen discuss next year's budget. The Board is considering buying one police car instead of two to help balance the budget. Photo by Cathy Cook.

The Poplarville Board of Aldermen will still need to cut $55,419 from the proposed city budget for the 2020-2021 fiscal year at their next budget workshop.

During the Board’s regular meeting Tuesday, the Board tentatively cut several large expenses to bring the budget closer to being balanced. At the start of the meeting, the Board needed to cut $221,736 in expenditures from the proposed budget.

To reduce expenses the Board proposed purchasing only one police car instead of two, forgoing a project to stripe Main Street, not budgeting to repair the police department building or city hall, not budgeting for the commercial cleaning of City Hall or buying a new City Hall sign and not purchasing new breathing apparatus or turnout gear for the fire department. Board members said some of the items might be added back in if other items can be found to cut during the next budget workshop set for July 30.

In a separate matter, the Board held off on issuing the College Square Shopping Center Tax Increment Financing Bonds. The bonds would be an economic incentive for the shopping center developer and would reimburse some of the costs of constructing the shopping center.

After executive session, Board member Shirley Wiltshire made a motion to proceed with issuing the 10 year bond, which would be a principal of $590,589, with accrued interest of $192,932 and an annual payment of $78,352.

The motion failed for lack of a second.

The proposed city budget still includes the TIF bond, and during budget discussions Board member Anne Smith said she does not want to take it out of the budget yet. Smith also proposed placing some kind of cap on the TIF bond based on the city’s finances, which Creel said could be discussed.

—Approved hiring Theresa Milar as a part time police officer to assist in organizing the department’s evidence room. Board member Kevin Tillman was the only dissenting vote.

The Poplarville Board of Aldermen accepted the resignation of Board member Tony Smith and set a special election date to... read more