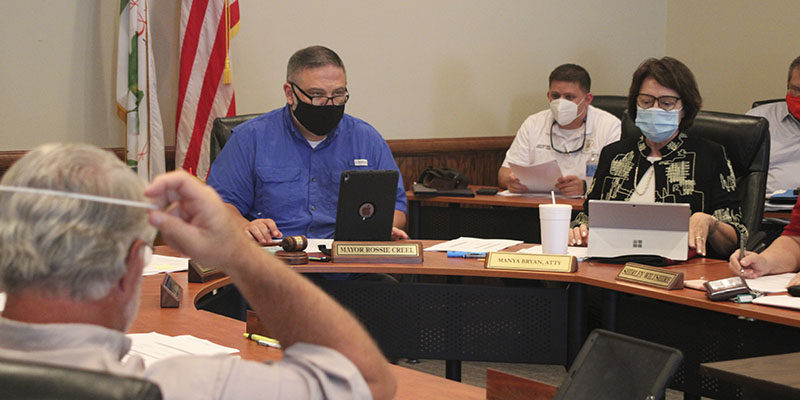 All attendees at Poplarville's regular Board meeting Tuesday wore face masks to prevent the spread of COVID-19. Photo by Cathy Cook.

The Poplarville Board of Aldermen will need to cut $184,000 from the city’s proposed budget for the next fiscal year.

The Board set a budget workshop for Thursday at 5 p.m. to go through the budget for the upcoming fiscal year. At $4.8 million, the proposed budget is $184,210 over the projected revenue for the 2020 to 2021 fiscal year.

The Board is also considering issuing Tax Increment Financing (TIF) Bonds for the College Square Shopping Center. The bonds would pay the shopping center’s developer for some of the costs incurred during the center’s construction. TIF bonds are meant to provide economic incentive for infrastructure development. The Board took the matter under advisement at their regular meeting Tuesday.

In 2017, the Board approved a TIF plan for the shopping center and entered an interlocal agreement with the Pearl River County Board of Supervisors to develop a TIF district in the city.

City Clerk Jane O’Neal advised the Board against issuing any TIF bonds.

“For the long term stability of the city’s finances, I have to recommend against it,” said O’Neal.

Board members Tony Smith and Shirley Wiltshire both said they understood that the city had a legal obligation to issue the TIF bonds. Mayor Rossie Creel told the Item that he needs to clarify with the bond attorney if the city is legally obligated to issue TIF bonds since the Board of Aldermen and Board of Supervisors approved the matter back in 2017.

Creel told the Board that he disagreed with O’Neal’s recommendation. Creel said he feels that regardless of legal obligation the city has an obligation to issue the bonds, because the developer decided to build the shopping center with the expectation that the TIF Bonds would be issued.

“I think we’re obligated to that, even if not required by law, because that’s the word that we gave,” said Creel.

O’Neal said that if the Board issues TIF Bonds it will be earmarking $200,000 annually from its general fund to debt services to pay for the two bonds for at least the next 10 years.

O’Neal speculates that if the sales tax and ad valorem revenue combined was not enough to pay the annual debt or if the developer defaulted, the Board would still be liable for the debt.

—Approved Police Chief Danny Collier signing a Mississippi Justice Information Center Holder of the Record Agreement with the Pearl River County Dispatch for NCIC. The agreement should already have been in place, said Collier.