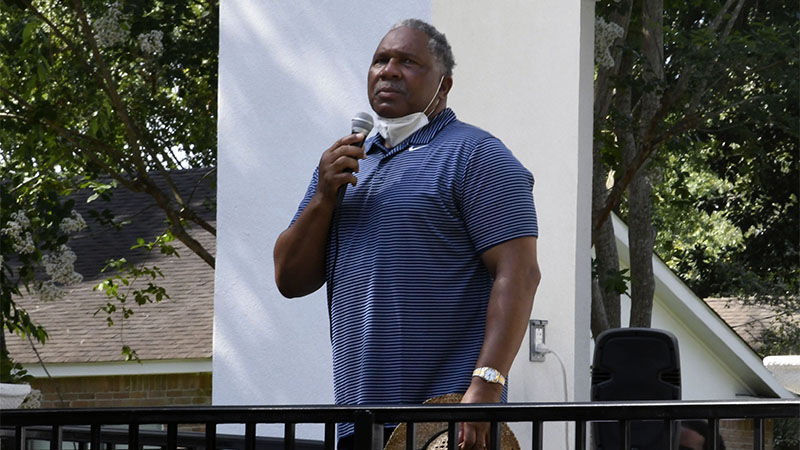 Together As One: Rev. Brian Dees speaks to attendees of the Unity Rally held Saturday, June 13, at Jack Read Park in Picayune. The message of the event was one of togetherness. Photo by Jonathan Mitchell.

Members of the community gathered on the afternoon of June 13 for a Unity Rally that took place at Jack Reed Park in Picayune.

The rally, along with a series of peaceful protests that had been occurring throughout the community, were in response to the murder of George Floyd, a black man, by a white police officer.

At the rally the message was clear and forthcoming, that even among the unrest caused by the violence in another case of police brutality, now is the time for the community to come together and work towards a more positive change.

There were several speakers who stood on the pavilion in order to address the crowd.

Each message was unique, but the overarching theme was that of support and understanding.

The speakers understood their platform and used it to talk with attendees about why now, more than ever, positive change is possible.

Pastor Allen Hickman was one of the speakers during the event and his message was one of faith as he explained how God sees all of his creations equally and loves them all dearly.

“It is people Jesus Christ died for. When we devalue people we lose something of ourselves and our ability to make good decisions, because people are the crown jewel of creation,” Hickman said.

Pastor Vernon Robinson, another speaker, had a powerful message about how faith helped him move beyond hate.

Robinson said there were instances in his life where he was affected by racism, and those situations stuck with him as he progressed throughout his life.

However, Robinson said once he became a pastor everything changed, and he was able to understand the plight of his fellow man because they are one and the same.

“There were some incidents in my life and after that I had hatred. However, once you receive Christ in your life we are no longer separate races,” Robinson said.

The previous week, city and faith based leaders held a Prayers for Peace event.

That event, combined with Saturday’s Unity Rally, have provided people in Picayune and surrounding communities with a venue to join each other in standing up for what they believe in while also stressing the importance of togetherness community member Rose Gray said after taking part in the Prayers for Peace event.