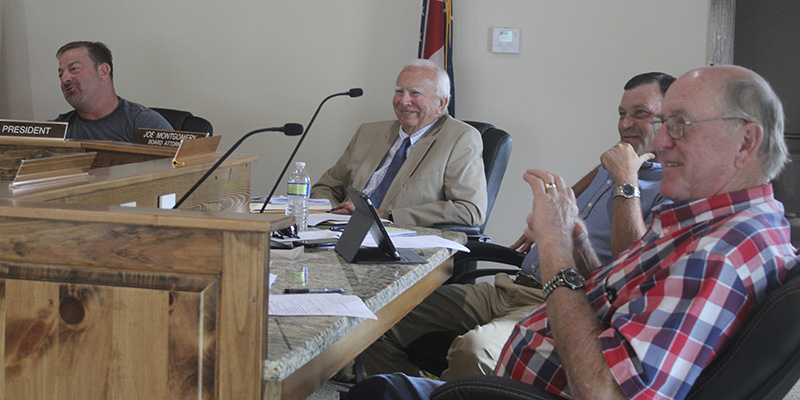 local matters: The Pearl River County Board of Supervisors approved an interlocal agreement with the city of Poplarville for the E911 consolidation during Wednesday’s meeting. The Board also discussed a rumor that the public is putting forth an effort to put liquor and beer sales on the ballot in November. Cathy Cook | Picayune Item

The Pearl River County Board of Supervisors approved an interlocal agreement for E911 consolidation with the city of Poplarville during Wednesday’s meeting.
The consolidation is intended to create a centralized dispatch for all law enforcement agencies in the county and give law enforcement new systems for dispatch, records management and jail management, according to previous coverage. The consolidation is meant to improve response times by improving communications between dispatchers, according to previous coverage.

The city of Picayune has not entered an agreement with the county on the consolidation yet.
County Administrator Adrain Lumpkin said that he wanted to clarify that with the new systems officers will be able to fill out reports from their vehicles. Officers will not be able to run NCIC searches from their vehicles, a function the county was planning on purchasing, but that was taken out of the contract to reduce costs.

Lumpkin also said he wanted to make it clear that members of Poplarville’s Board of Aldermen were not told that the price to house inmates in the county jail would be increased if the city did not agree to the consolidation, and that only the Board of Supervisors would have the authority to alter that contract. Concern that the county would increase the cost of housing inmates for the city of Poplarville if the city did not enter the interlocal agreement was one of the factors the Poplarville Board of Aldermen discussed before entering the interlocal agreement, according to previous coverage.

The Board also approved travel for IT Director Carey Metzler from July 6-7 to Batesville, Miss. to sit in on training for the new records management system that is being purchased as part of the consolidation.

Agisent, the vendor providing the records management system, will be installing the same system in Panola County, said Lumpkin, and offered to let the county’s IT personnel sit in to get ahead on training.

In a separate matter, District III Supervisor Hudson Holliday said he has heard from local business owners that they are attempting to get a petition together to put a countywide liquor referendum on the ballot for the election in November.

County Attorney Joe Montgomery said he would look at drafting an ordinance for the Board to consider.

Beer is already sold in stores and restaurants in Picayune and Poplarville. Holliday said he thinks it is unfair that 23 county stores outside of those municipalities cannot sell beer.

The next Board meeting is scheduled for Monday, July 6 at 9 a.m.