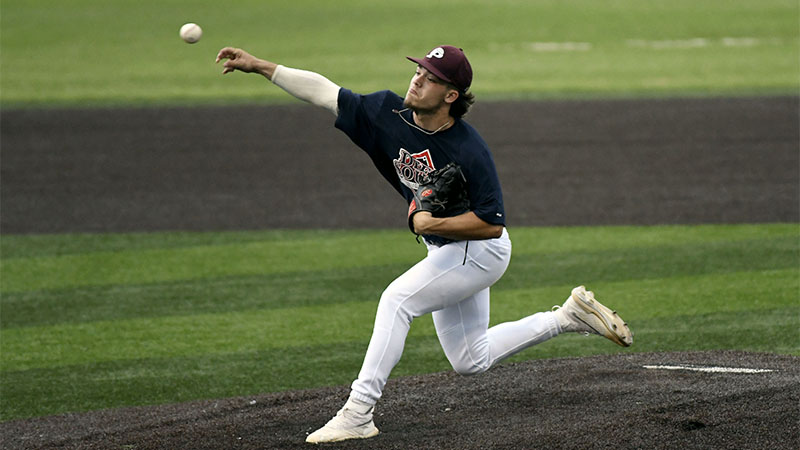 Luke Smith throws a warm up pitch as he takes the mound for Team Parker. Photo by Jonathan Mitchell.

Team Bartlett’s strong defensive showing ended up earning it the victory with a final score of 3-1 in favor of Bartlett.

The victory moved Team Bartlett to 1-2 on the season with the loss dropping Team Garner to 1-1.

Former Poplarville player Canaan Ray went 1-3 with an RBI for Team Bartlett while Beckett White also went 1-3 and accounted for the team’s other two RBIs.

The two teams squared off in a high scoring game that saw Team Larson come out on top 8-6.

The win was Team Larson’s first of the season while the loss dropped Team Parker to 1-2.

Team Parker had the lead through three innings, but then Team Larson exploded in the fourth inning scoring eight runs and sealing the victory after the game was ended due to inclement weather.

Several athletes from Poplarville and Picayune participated in the game including Luke Smith, Kade Turnage, Blaise Breerwood and Brady Tynes.

Breerwood went 2-3 on the night with a run scored for Team Larson, while Turnage went 1-2 with an RBI and run for Team Parker.

Tynes earned a walk and was one of the six runs scored for Team Parker.

Even with the high number of runs, Larson said he was happy with his pitchers’ tenacity on the mound when their backs were against the wall.

“What I liked is some of our pitchers struggled at times and you like pushing those guys and seeing if they can get out of situations. I like to see how players react to failure,” Larson said.

Parker said the loss wasn’t the result the team wanted, but in a summer league like the DSCL, especially after the athletes lost portions of their seasons and have been stuck in quarantine, the main focus isn’t necessarily on the final score.

The athletes need the experience and opportunity to knock off the rust, and that’s why Parker was still happy with the team’s performance despite the end result.

“Really its just about making everybody have fun. It’s not about the winning at times, and just about having fun and learning from the people around you,” Parker said.

The second week of games at PRCC wrapped up June 24 with one game taking place at 4 p.m. and the second game starting at 7 p.m.