Snakes: Are you fascinated or repelled by them? 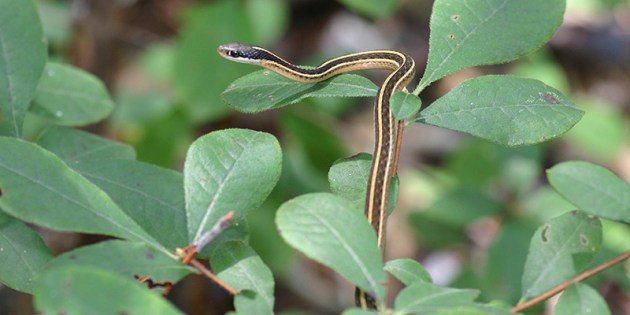 Garter Snake: While staff rarely see snakes in the trees at the Crosby Arboretum, we came across a small garter snake that had climbed up the native azalea next to the visitor center deck. 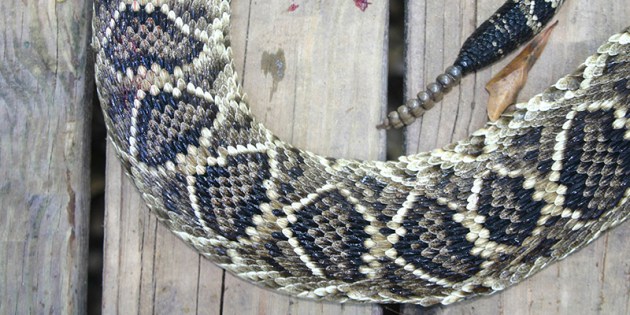 DiamondBack: The “rattle” on this diamondback rattlesnake makes an unforgettable sound. Thankfully, these venomous snakes come with an “early warning system.” 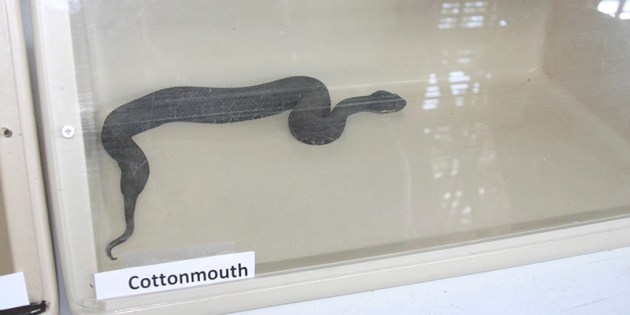 Venomous: The cottonmouth is a venomous snake found in Mississippi. Also known as a “water moccasin,” it is characterized by an unusually thick body and a slender tail. 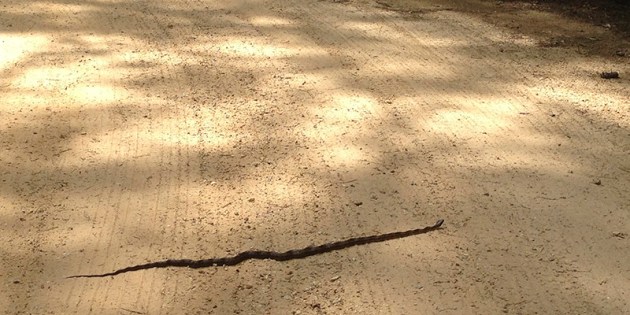 By Patricia Drackett
Director of the Crosby Arboretum

It’s a frequent question whether I’m leading a tour, or just showing a single person around the Arboretum – “Do you have snakes here?” The simple answer is yes, because the habitats at our public garden are very “healthy” natural environments with a rich biodiversity that includes both plants and animals.

However, the three miles of trails, or Landscape Journeys, passing through our woodland, savanna and aquatic exhibits are typically six feet wide. This fact allows visitors the ability to spot any snakes from a distance, and such sightings are uncommon. If a snake is encountered, it is usually in the water or at a different level than the main trail, such as the cut out in the Cypress Cove deck near the south pitcher plant bog. These locations offer the slinky reptiles to be observed safely at a distance.

Another fact to consider is that people who come to the Arboretum travel through the site on pathways. None of the exhibits are “off-trail” for our visitors. Walking into the forest or venturing into the tall grasses of the Savanna would certainly increase one’s chances of finding a snake. Grounds Manager Terry Johnson probably has the most tales to tell of these encounters as he spends most of his day in forest, field and various aquatic exhibits. But he is still with us after 22 years!

When the weather warms up, snake sightings will become more frequent. The creatures often provoke a primitive repulsion, but others are fascinated by them. I’ve heard many people say many times that they are much more “creeped out” by spiders than snakes.
I’ll never forget the Saturday we had over a hundred persons on the Pinecote Pavilion to participate in a program featuring live snakes with herpetologist and outreach educator Bryan Fedrick with the Mississippi Museum of Natural Science.

This was a rare opportunity to see the six venomous snake species found in Mississippi up close and personal. Standing only a few inches from live specimens was quite different from learning about them through a photo or plaster cast. It was an unforgettable educational experience.

The sixth Mississippi venomous snake is the red, black and yellow coral snake. It is not a pit viper, but belongs to the same family as cobras. This is the snake you may have heard described in the phrases, “red on yellow will kill a fellow”, and “red on black, a friend to Jack” Bryan displayed the non-venomous scarlet king snake and a red milk snake, which are often mistaken for coral snakes.

Bryan emphasized that snakes will only bite when they feel threatened. He told the audience what to do when they spot a snake – stop, and take a few steps back. Don’t try to pick them up! More people try this than you might think.

Emergency room doctors report that the most common snake bite victim is male, between the ages of 18 and 35, and the most common place they are bitten is the area between the thumb and forefinger. Usually, there is alcohol involved. What can you learn from this profile? How can you avoid being a victim in the future?

To learn more about Mississippi snakes, visit the MSU Extension website at https://extension.msstate.edu/ and enter the keyword “identify snakes” or “reducing snake problems around homes” in the search field at the top of the page. See the article by Extension wildlife biologist Leslie Burger, “Stay safe around snakes, but let them do their job”. Leslie points out that snakes are an important part of our natural world and are also helpful to us in many ways. Of the 50 different Mississippi species, in most cases, the snakes that live near people, such as the garter, ringneck and rat snakes, are harmless.